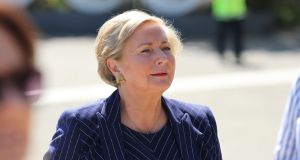 The Government would take “prudent’’ decisions in the run-up to the October budget, Tánaiste Frances Fitzgerald has said.

She told the Dáil on Thursday the Government recognised the economic implications of a hard Brexit.

“Clearly, one year on from the decision of the British people to leave the EU, the opening of the negotiations is very welcome,” she added.

“They are important for all of us.”

The Tánaiste was responding to the warning from the Economic and Social Research Institute (ESRI) that the Government would have €600 million less for spending and tax cuts in the event of a hard Brexit which was raised by Sinn Féin finance spokesman Pearse Doherty.

She said the report had clearly addressed the various issues arising from a hard Brexit and the economic implications and job losses that could follow.

Mr Doherty said it was worth noting the Irish Fiscal Advisory Council believed the model used by the ESRI seriously underestimated the impact of Brexit.

“So it could be a lot, lot worse if that were to flow,” he added.

Ms Fitzgerald said the Government’s priorities had been put at the centre of the negotiations.

“The reality is the Government has been working at a pace and has been doing extremely intensive diplomatic engagements, as you well know, with the relevant people across Europe, ” she added.