Protests against councillors is going to be a ‘trend’, Fianna Fáil claims 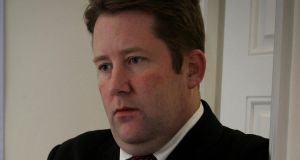 Fianna Fáil has claimed the blockading of Fingal county councillors after a local authority meeting last week “is obviously going to be a trend across the country”.

The party’s Seanad leader, Darragh O’Brien, described as “sinister” a protest in which councillors and staff were prevented from leaving the council car park for two hours.

Mr O’Brien said the incident was an “attack on democracy” and that Independent councillor Jimmy Guerin, who tabled a motion calling on the council to condemn violence against Irish Water workers “was singled out by this bunch of thugs for abuse”.

He also described the protesters as “scumbags”, but cathaoirleach Paddy Burke said his comments were “unparliamentary”.

The Fianna Fáil Senator added: “I would say to the protesters, Paul Murphy’s crowd, Éirigí and all these other people that people are entitled to disagree with them.”

But Independent David Norris said an attempt was being made to demonise Socialist Party TD Paul Murphy “who is a duly elected public representative”. He added: “People should be able to disagree, but why call it verbal abuse?”

Mr Norris asked if Senator O’Brien “has any idea what I went through over 30 years? I went through death threats and filthy abuse. I laughed at them. People should grow up,” the gay rights campaigner said.

“They are adults and should be able to take verbal abuse. I do not say it is pleasant or always appropriate, but it is not the bloody third World War,” Mr Norris added.

Pat O’Neill of Fine Gael said he agreed with Mr O’Brien because “councillors in Kilkenny had to face the same thing recently in regard to a central access scheme”, being verbally assaulted and attacked.

But Fianna Fáil’s Labhrás Ó Murchú said the way a member of the Oireachtas and two councillors were arrested in the early hours of the morning had left a “big question mark”. He said care had to be taken that the message was not given that they were treated differently because of a water protest.