Privatisation of Bus Éireann ruled out by Minister 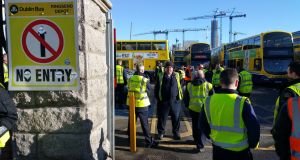 The scene at Ringsend garage in Dublin on Friday. Photograph: Frank Miller

Privatisation of Bus Éireann has been ruled out by Minister for Transport Shane Ross. In heated Dáil exchanges with Opposition TDs, he said he had stated time and again privatisation was not on the agenda.

Pointing to the public gallery, he said: “And those of you who say it is are deliberateloy misleading the people up there in the gallery. I have no intention of going down that road, nor will I go down that road.’’

He said he was not Minister to be popular, adding it was his job to make the right decision. “I am not here to jump on bandwagons or ride on the back of discontent,’’ he added. “I am here to make decisions which I think are in the interest of the taxpayer and the travelling public.’’

He said he accepted a lot of what was said about the public transport system and it was his business to get involved in such matters. He said he was repeating his offer to all stakeholders to welcome them to the table to discuss those issues the moment the dispute was over.

Earlier, Solidarity TD Mick Barry said in an unpopular Government, with unpopular Ministers, Mr Ross was the most unpopular of them all.

“The way forward can only be shown if you say there is going to be an increased subvention for a proper public transport service and Minister Leo Varadkar says we are going to properly compensate Bus Éireann for the free travel pass,’’ he added.

“Otherwise it is about a low-paid, race to the bottom and privatisation agenda.” Mr Barry said the message from people around the country to the Minister was to resolve the dispute and fund public transport.

Replying to a series of Dáil questions, Mr Ross said he welcomed the fact that both parties had gone back to the Workplace Relations Commission (WRC). “That is a very healthy development,’’ he added.

He said it was exactly what the Government had been looking for and represented the only prospect for a settlement.

Earlier, the extension of the dispute to Irish Rail and Dublin Bus last Friday was strongly condemned by Taoiseach Enda Kenny. “I condemn the wildcat strike which took place unofficially last week which brought this city and so many other places, hundreds of thousands of people, to a standstill,’’ he said.

Mr Kenny repeated the dispute could only be settled at the Workplace Relations Commission. He said he hoped unions and management would get together with the commission. He said the Minister for Transport had “been more than encouraging’’ about further talks.

The Taoiseach was replying to Fianna Fáil leader Micheál Martin who said people were frustrated, annoyed and angry at the lack of activity at Government level in resolving the dispute.

There was a general sense in the regional towns that if the dispute were in Dublin, it would have been resolved a long time ago, he said. The dispute was causing massive disruption, he added.

Mr Martin said the dispute was now in its 12th day, adding the company was not getting its fair share and a reasonable deal. He said there had been a significant reduction in the free travel subsidy since 2010.