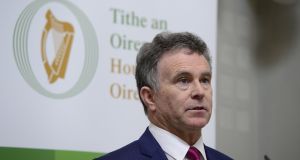 A senior member of the National Assets Management Agency and “senior people in Leinster House” attempted to pressurise the chair of the Public Accounts Committee into limiting the findings of a report into the Project Eagle loan book, an Oireachtas committee has heard.

Fianna Fáil TD Seán Fleming made the allegation a day after claiming Minister for Finance Michael Noonan threatened to injunct the committee for criticising a meeting Mr Noonan had with a vulture fund.

Mr Fleming, who chairs the Public Accounts Committee, told the committee on Thursday that “senior people” in Leinster House had made it clear they would prevent the report from being issued if they were not happy with it.

When asked who he was referring to, he said: “I’m not going to name names, I’m talking about senior officials in the Dáil.”

Mr Fleming said he was not referring to TDs, but to officials in Leinster House.

In addition, he said Frank Daly, the chair of Nama, also raised the question of a legal challenge over the report.

Mr Fleming said he wished to place on the record that the Nama chair “did mention to me the issue of legal advice was being considered, but the high financial costs of it to Nama was an issue they had to take into account”.

Mr Fleming also said that it was made clear to him that “Nama had a dossier of all my previous comments in relation to the Comptroller and Auditor General”.

He said that he had often been critical in the past of C&AG reports.

Mr Fleming added that it was made clear to him that if the committee was backing up the C&AG, these files “would be used to show, that on previous occasions, I had no problem criticising the C&AG”.

A number of members of the committee said they were “shocked” at the threats to the committee’s work and urged they write to Mr Noonan to seek an apology from him.

However, Fine Gael TD Josepha Madigan accused members of the committee of “political manoeuvres”, adding that the committee was hearing just one side of the story. She said Mr Noonan, for example, had not had a chance to respond to Mr Fleming’s accusations.

The charge was rejected by fellow committee members including Independent TD Catherine Connolly.

On Wednesday, Mr Fleming had claimed in the Dáil that Mr Noonan had threatened to injunct the committee and called into question the Minister’s fitness for office.

In a report on the controversial disposal by Nama of Project Eagle, the committee criticised Mr Noonan for meeting senior representatives of Cerberus, the US investment firm that was successful in its £1.1 billion bid for the portfolio, shortly before the sale.

Mr Fleming pointed out there were 101 pages in the report and two pages about the Minister and he seemed to think it was all about him.

In a letter sent to Mr Fleming on Thursday, Mr Daly said he contacted Mr Fleming to say he was disappointed at media leaks of the committee’s draft report on the Project Eagle sale which noted irregularities on the part of Nama during the process.

He said no such finding had been made by the C&AG and that such a finding would represent a serious matter and Nama would have to consider seeking legal advice in the event of such an outcome.

Mr Daly said Mr Fleming assured him the report contained no such reference and that there was no longer a need to seek legal advice. He also denied having a dossier about Mr Fleming or any other person.