Deputies to be incorporated in the rotation of Dáil speakers 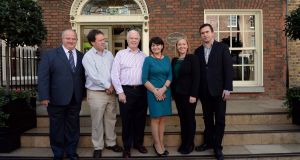 The 14 non-aligned TDs in the Dáil are to be allowed speaking rights for the first time in a significant shake-up of House rules and procedures.

The deputies, including the five ex-Fine Gael Reform Alliance TDs, were informed of the changes in an email from the Ceann Comhairle’s office last night.

The email informed them that speaking slots for “others” would be incorporated in the rotation of Dáil speakers, after the initial spokespersons round.

The “others” slot is intended for use by members who do not have access to the speakers lists prepared by the parties or the Technical Group.

Very grateful to Ceann Comhairle for facilitating those of us exiled from our parl parties with some vital Dail speaking time.

The TDS, who were expelled from the party after voting against the Government on the abortion Bill, had planned to formally request rule changes to allow them speaking rights when the Dáil resumes.

Wicklow TD Billy Timmins said the alliance wanted to make a positive contribution. He also said alliance members were still seeking to have their places on Dáil committees reinstated in the wake of their expulsion from Fine Gael.

Ms Creighton tweeted: “Very grateful to Ceann Comhairle for facilitating those of us exiled from our parl parties with some vital Dáil speaking time.”

Dissident Labour TD Róisín Shortall confirmed earlier the initiative did not just apply to members of the Reform Alliance but to all 14 non-aligned TDs.

The Reform Alliance, which comprises five TDs and two Senators, has said theirs is a loose grouping and not a new party in the making.

They held their first day of formal discussions last week on a collective approach in the Oireachtas.