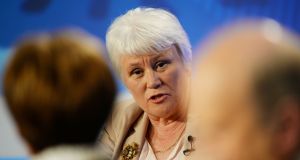 Minister of State Catherine Byrne: “First centre will be a pilot to determine suitability and effectiveness of injecting rooms in an Irish context.” Photograph: Alan Betson

No decision has been made on the location of the first pilot supervised injecting centre for drug users, Minister of State for Health Catherine Byrne told the Dáil.

Introducing the Misuse of Drugs (Supervised Injecting Facilities) Bill, she said it simply reversed the current situation where such centres were illegal.

“However, it is intended that the first centre will be a pilot to determine the suitability and effectiveness of injecting rooms in an Irish context,’’ she added.

Ms Byrne said the establishment of supervised injecting facilities was one way of reaching out to people who were injecting themselves on the streets, down an alleyway or behind a bin.

“An injecting centre is a controlled environment where drug users may inject drugs they have brought with them,’’ she added.

She said drug users could get access to clean injecting equipment.

There would be trained staff to provide emergency care if they suffered an overdose, as well as an opportunity to have minor health issues treated by a doctor or a nurse.

She said an injecting centre could be a way back from the desperate situation in which many street injectors found themselves.

Last autumn, the first centre in France opened in Paris, and two more were planned.

“Evidence from the long-running sites demonstrates a reduction in fatal overdoses and in the risk of transmitting blood-borne diseases,’’ she added.

“They show a decrease in the amount of public injecting.’’

Fianna Fáil spokesman Jack Chambers said there was a need for a multifaceted, multi-agency approach that was properly resourced to tackle drug addiction.

“The injecting centres in this legislation, if correctly introduced and managed, could be an important step on the road to tackling this problem once and for all,’’ he added.