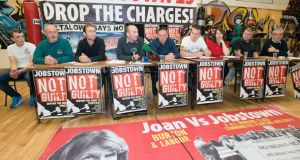 The day-to-day operations of An Garda Síochána are a matter for the Garda Commissioner, Taoiseach Enda Kenny has said.

“The issuing of charges or summonses is a matter for the gardaí,” he added.

The Taoiseach was replying in the Dáil on Tuesday night to Socialist Party TD Paul Murphy who claimed the force was targeting anti-water charge protesters.

Mr Murphy said named individuals had found out through RTÉ that they were going to be charged with false imprisonment.

“That is an outrageous infringement on their right to privacy and with the administration of justice,” he added.

He said it was a very serious matter if anti-water protesters were being spied on by a secret group within the Garda Síochána.

Mr Kenny said he had no knowledge of such a group and suggested Mr Murphy table a question to Minister for Justice Frances Fitzgerald.