More pressure needs to be put on banks to fit tracking devices on ATMs, Dáil told 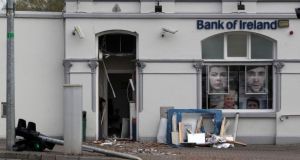 More pressure needs to be put on banks to put tracking devices on their ATM machines to deal with the series of robberies mainly in cross-Border areas, the Dáil has been told.

Fianna Fáil justice spokesman Jim O’Callaghan said these robberies were “something we should be able to deter”, where mechanical diggers are stolen and used to target ATMs, mainly in more remote areas.

Fifteen ATMs have been robbed since the beginning of the year including four in one night in April.

Mr O’Callaghan also called for increased resources for gardaí in Border areas in the wake of the robberies. “We don’t know if they are armed but it wouldn’t surprise me,” he said adding that there was a need for another Garda armed response unit for the Cavan-Monaghan region.

Minister for Justice Charlie Flanagan confirmed that a new armed unit based in Cavan and close to the Border, will be operational by the end of the year.

Preparations are currently being made for “fitting out” the unit, Mr O’Callaghan said.

Border armed support units are currently in place in Donegal and in Louth.

Mr O’Callaghan said “we had a problem in this country a number of years ago with transit vans being attacked”, transferring cash to and from businesses and banks.

With changes in habits, the issue was dealt with and devices could be put on ATMs so that they could be tracked, he said. “This is something we should be able to deter.”

Mr Flanagan also said the secretary general of his department had met the banks and the Banking and Payments Federation Ireland.

He had met the Garda Commissioner Drew Harris on the issue and had a “specific briefing on the matter of ATMs” from the PSNI.

He said the issue was no different in the North than in the State and there was “structured strategic co-operation” between the two police forces including a recent seminar on cross-Border organised crime organised by both forces.

Mr Flanagan said he also discussed the issue with the British deputy prime minister and the Northern Secretary. He said this type of cross-Border co-operation would continue into the future.