‘The telescope is beginning to shorten,’ Enda Kenny tells House 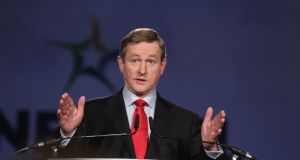 The Taoiseach isn’t sure the Heritage Bill will beat the legislative clock.

“I can’t give you a guarantee it will be dealt with finally and fully before the Dáil rises,” Enda told a disappointed Billy Timmins.

“The telescope is beginning to shorten.”

He said this with a meaningful look, followed by a theatrical wink towards the press gallery. Not long now.

The banking inquiry report should be out on Wednesday. The Taoiseach said the Dáil would have the opportunity to discuss it on Thursday morning. Which should leave next Tuesday free for him to tell the House he’s nipping up to the Park to ask the President to dissolve the Dáil.

Of course, Enda could allow more time next week for consideration of the report, but he would also be handing Opposition rivals more time to make pre-election speeches savaging his government.

He didn’t have much company in the chamber for Leaders’ Questions. One Minister sat beside him – first Simon Coveney and then Leo Varadkar. No more than five backbenchers managed to make it inside at any one time.

The Labour Party mustered four TDs for one glorious interlude, but for most of the session it was just Robert Dowds and Seán Kenny flying the flag, neither of whom are running for election again.

In the sleepy chamber, nobody was in the mood for heckling. It wasn’t until some time later, during the order of business, that the ritual throwing-out of Peter Mathews took place. The Ceann Comhairle reminded the former FG TD for Dublin South, now an Independent, that the rules required him to ask questions to do with promised legislation.

Peter chanced his arm. As the Dáil is now in its last week, perhaps “it’s a moment for a bit of self-reflection” he intoned. Then he tried to limbo under the rules and talk about burden-sharing on the losses of the private banking sector. The Ceann Comhairle tried to rule him out of order. Peter took grave offence.

“My patience is at its wits’ end,” he cried. “And I feel I’m being bullied at this stage.”

The Ceann Comhairle, whose patience has been sorely tested by persistently piqued Peter, tried to get him to stick to the standing orders.

“You’re not being bullied!” shouted Seán Barrett. “You better not accuse the chair of bullying.”

Mathews was further annoyed because the Ceann Comhairle had been slow to call him to speak. “I had my hand up for 10 minutes.”

The rest of the chamber – the Taoiseach, the Fianna Fáil leader, Jonathan O’Brien representing Sinn Féin and the few other TDs present – looked from Barrett to Mathews, Mathews to Barrett, transfixed by the procedural ping-pong.

“Excuse me deputy,” huffed the Ceann Comhairle. “You’ve been at this for the last number of years – never mind today – and I’ve told you consistently that there are certain things you can raise on the order of business.” Peter continued protesting.

The Ceann Comhairle had a conniption. “I’m not bullying you . . .”

“I’m not withdrawing the remark.”

“Well then, leave the House please.”

“Thank you, leave the House. I’m not taking that abuse from you anymore,” fumed Barrett.

Peter left on a high, taking his dudgeon with him. “It’s disgraceful behaviour, with one week to go,” he sniffed before exiting the chamber.

Compared with the carry-on in the Dáil, they were wonderfully behaving beyond in the Seanad. They had a VIP visitor in the gallery. “I welcome the former world boxing champion Bernard Dunne and his group to the gallery. You are very welcome” said cathaoirleach Paddy Burke.

“We could do with you in here on some occasions to keep order.”

Bernard was a guest of Gerard Craughwell, former president of the Teachers’ Union of Ireland. He was there to listen to a discussion of Deis schools.

As it turned out, cathaoirleach Burke should have dispatched Dunne down the corridor to the Lower House, where his special skills would have come in handy.

Meanwhile, Independent TD Clare Daly was also contemplating the imminent end of the Dáil as her regular jousts with Defence Minister Simon Coveney neared an end.

“I’m disappointed to note that the Minister believes he will get his job back, because I had my eye on it. I also know Deputy Wallace is pretty hopeful of getting the justice portfolio – you never know.”

Maybe one of them might be lucky, although word is that Michael Lowry has his eye on justice.

So when will the election happen? Friday, February 26th seems the most likely date. But some TDs are talking about Thursday 25th.

Ireland are playing England in the Six Nations Championship on Saturday the 27th. Thing is, the game is at Twickenham.

“Forty-thousand Fine Gael supporters will be at the match,” a Government backbencher told us, though how he knows this is a mystery. Perhaps it has something to do with the party’s much- vaunted internal polling system and huge preparation for the coming campaign. “We’ll have to go for the Thursday.”

The telescope is beginning to shorten . . .