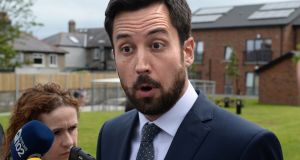 Minister for Housing Eoghan Murphy: TDs rejected his amendment to the Green Party motion by 84 votes to 46 and also refused a Fianna Fáil amendment by 93 votes to 37. Photograph: Dara Mac Dónaill

Minister for Housing Eoghan Murphy has suffered his first defeat after the Dáil accepted a Green Party motion to strengthen building standards and regulations and fix the “appalling construction quality” of homes built during the boom.

TDs accepted the Green Party proposal and a Sinn Féin amendment without a vote. The House then rejected the Minister’s amendment by 84 votes to 46 and also refused a Fianna Fáil amendment by 93 votes to 37.

The vote came shortly after the House was reminded of the warning by fire experts that the Grenfell Tower fire catastrophe could happen in Ireland.

People Before Profit TD Richard Boyd Barrett highlighted warnings that 40 per cent of multi-occupancy units built during the Celtic Tiger are fire hazards.

The Dún Laoghaire TD said the Government ignored warnings from fire experts that the updated building regulations were defective and did not provide for proper fire resistance between units in multiple-occupancy buildings.

And he described the deaths in the London fire as “murder by negligence, murder by austerity, murder by cutbacks, murder by inequality and murder resulting from utter contempt for the wellbeing of the less well-off in British society”.

Tánaiste Frances Fitzgerald said Mr Murphy had immediately started a review of all fire safety measures and that fire deaths had almost halved in the past 15 years.

While the Dáil vote is an embarrassment for the minority Government, it has no implications for its stability, but the new Minister may take on board some of the proposals.

The Sinn Féin amendment called for an urgent review of combustible materials and of safety compliance and enforcement regulations.

The decision on Thursday follows a two-hour debate on Wednesday night on the motion introduced by Green Party deputy leader Catherine Martin.

She called on the Government to “properly tackle the sorry legacy of defects in housing construction and to strengthen building standards and regulations in order to safeguard against this building and regulatory failure ever recurring”.

Ms Martin accused the Government and its predecessor of showing “no political appetite” and giving “no priority to dealing effectively with serious problems and issues arising from appalling construction quality of so many homes built during the boom-time era”.

Ms Martin acknowledged that Mr Murphy was new to his portfolio but “his party and Government colleagues certainly are not”.

She pointed out that in the past four years there had been four Ministers with responsibility for housing. “This shows the level of genuine intent and respect for the role of this ministry which is at the centre of the biggest crisis of our time.”

The Green Party also called for a feasibility study on the creation of a statutory authority to supervise and regulate building controls.

Mr Murphy said the Government largely agreed with the sentiment of Ms Martin’s motion, including a proposal for a national office to improve the effectiveness of the oversight and governance of the building control system.

But, he said, “we do not need a new quango to do this work.” A new building control management system is in place and a tender would be conducted to appoint a lead authority to carry out risk-based targeted inspections.