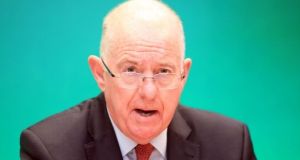 There were sharp exchanges in the Dáil when Minister for Justice Charlie Flanagan was accused of taking a “potshot” at Sinn Féin over providing a voice for Northern Ireland on Brexit.

Mr Flanagan thanked the party for its support of the Government’s approach to the negotiations on Britain’s withdrawal from the EU.

But he accused Sinn Féin of abdicating responsibility for getting the Northern Ireland Assembly up and running again, as well as criticising the “intransigence of the DUP”.

The Assembly has been abeyance since its collapse in January last year and did not reconvene after the March 2017 elections because agreement could not be reached.

Donegal TD Pearse Doherty of Sinn Féin told the Minister to “have a wee word” with the Tánaiste and Minister for Foreign Affairs Simon Coveney, and said Mr Flanagan knew full well about the complexities of the North.

It was “unsettling” that Mr Flanagan would take a “potshot” at his party when they had supported the Government approach on Brexit.

Mr Doherty had said that the DUP, whose 10 votes prop up the Conservative party in government in the UK, moved “from a position of not wanting a hard border to seeking a hard border”.

He said it was a “reckless and irresponsible view”.

Mr Doherty said the view of Mr Coveney that the transition period into Brexit could be extended “may have merit” but he added that while the Government was not in favour of deadlines “there has to be a deadline at some point”.

Mr Flanagan replied that “it’s a bit rich of Sinn Féin to look to the Irish Government and criticise the relationships between North and South” when “responsibility has been abdicated by your own party”.

But Mr Doherty said he would advise Mr Flanagan “to have a wee word with An Tánaiste in relation to what’s going on in the Assembly”, because Mr Flanagan “should know fine well” about the difficulties in the North.

Fianna Fáil deputy leader Dara Calleary said certainty was needed on the challenges ahead and he asked, “What plans have our Government in place for businesses, citizens and employees regarding UK Ireland supply chains and a land bridge across the UK for markets in Europe?”

Mr Flanagan expressed his disappointment that they were not on the cusp of a deal, but he acknowledged “that the solidarity of EU 26 towards Ireland is enduring and I believe that priority is of the most importance”.