Micheál Martin accuses Taoiseach of saying anything to get elected 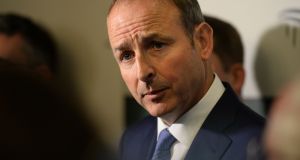 He claimed the truth simply did not matter to Enda Kenny in his political messages and speeches to the people and the Dáil.

He said the Taoiseach denied reality and the truth when it stared him in the face. He claimed language meant nothing to Mr Kenny.

“He breaks promise after promise, believing that media management will take care of everything,’’ he said.

“Nowhere is this behaviour more manifest than in the Government’s abandonment of universal health insurance, which was the cornerstone of its health philosophy for the past 10 years and longer.’’

“The Government remains committed to the ending of a two-tier health system which clearly has inadequacies and inefficiencies in it,’’ he said.

Mr Kenny said the Government would commission further work as envisaged by the ESRI in its report. “Other models of funding should be, can be and will be examined,’’ he said.

The Government wanted to introduce universal access to healthcare based on medical need, he said.

The Taoiseach said the ESRI produced its findings at the Government’s request.

“That is slightly different from Fianna Fáil’s programme for health, which was rejected by Deputy Martin’s author,’’ he said.

Mr Martin said George Washington had once said it was better to offer no excuse than a bad one. “I respectfully put it to the Taoiseach that what I said at the outset is reflected again in his reply,’’ he said.

Mr Kenny said he recalled Mr Martin’s words when he was in the Department of Health.

“I recall him saying he would end waiting lists for once and for all,’’ he said. “I recall his personnel, payroll and related system, PPARS.’’

It had also promised to introduce a universal health insurance scheme, despite warnings from Sinn Féin, other parties and independent experts that it would not work.

“This morning, the Minister for Health, Deputy Varadkar, in a car crash interview, said that instead of a concrete plan for health, the Government has a vision,’’ Mr Adams said. “The people languishing on trolleys this morning do not need a vision; they need a solution.’’

He said the Minister said the UHI scheme remained the preferred model.

“This is clearly due to Fine Gael’s ideological position which favours the interests of private health insurance companies over the interests of patients and their families,’’ he said. “This is a for-profit position.’’