Mhic Mhathúna radio interview: ‘My world began to slow down and stop’

‘It makes us reflect on the obligations we have as members of Government,’ Paschal Donohoe tells the Dáil 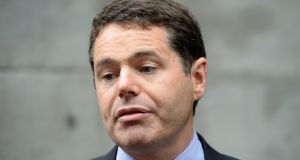 Minister for Finance Paschal Donohoe has said his “world began to slow down and then stop’’ when he heard the RTÉ Radio Morning Ireland interview with Emma Mhic Mhathúna on Thursday. Photograph: Frank Miller

Minister for Finance Paschal Donohoe has said his “world began to slow down and then stop’’ when he heard a radio interview with Emma Mhic Mhathúna on Thursday morning.

He was listening to a young woman with cervical cancer who had to sit down and talk to her children and to her family about what did not lie ahead.

“It makes us reflect on the obligations we have as members of Government and of this Dáil,’’ he said.

Ms Mhic Mhathúna is among the women who were wrongly told they had normal smear tests through the CervicalCheck screening programme.

She revealed in the interview on RTÉ’s Morning Ireland that she is terminally ill.

Mr Donohoe told the Dáil the Government’s only agenda was to establish what had happened.

Asked by Sinn Féin health spokeswoman Louise O’Reilly if he had confidence in HSE director general Tony O’Brien, the Minister said the greatest duty was to restore confidence in programmes that had saved lives and helped with the health of women.

“And because of that, I believe that Mr O’Brien should continue in his work across the next number of weeks,’’ he added.

Ms O’Reilly said, like many others, she was fighting back tears listening to the radio interview. “This woman, and the victims of this scandal, need and deserve accountability,’’ she said.

Mr Donohoe said the Government had put in place a scoping inquiry relating to the issues, which would provide an interim report in the next few weeks and a final report shortly afterwards.

“It is an interview that will stay with anybody who heard it ... it sears the soul of our country,” he said.

He said it was hard not to be completely distraught with the devastating heartbreak faced by Ms Mhic Mhathúna and her family.

“There are no words that anybody can say that will console her, her five children or her friends,’’ Mr Calleary added.

Labour health spokesman Alan Kelly said what had emerged was “a stain on all of us and on the health service’’.

He said Labour wanted confirmation all payments and costs associated with treatment of the women affected would be covered.

He accepted, he said, some people might not want to speak publicly at the commission of investigation, but some definitely would.

“If they are speaking on national radio and television, they certainly want to speak at the comission of inquiry in public, so we must allow that to happen,’’ he added.

Mr Donohoe said in responding to the tragedy, the House needed to be aware that, while it was looking at a great private tragedy and anguish, the screening programmes in place had worked for many.

“That is why there is such an imperative on all of us, but particularly those of us in Government, to ensure we restore confidence in respect of the issues and tragedies that are now causing these programmes to be challenged,’’ he said.