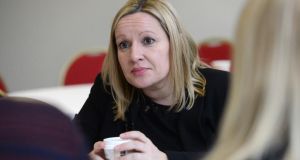 Lucinda Creighton has claimed that because Enda Kenny “wants the referendum to pass he will therefore muddy the waters and leave the surrogacy issue until a later date”. Photograph: Cyril Byrne

Former minister of state Lucinda Creighton has accused the Taoiseach of being “very dishonest” about the issue of surrogacy and “hiding” it to ensure the passage of the same sex marriage referendum.

Ms Creighton claimed that because Enda Kenny “wants the referendum to pass he will therefore muddy the waters and leave the surrogacy issue until a later date”.

Surrogacy will not be dealt with in the Children and Family Relationships Bill currently before the Dáil and legislation on the issue will not be enacted before the general election.

Minister for Justice Frances Fitzgerald said however that further work was necessary on surrogacy issues to fully implement them and it was better that they be dealt with in the broader scope of assisted human reproduction legislation, which had been initiated by the Department of Health.

“Issues around international commercial surrogacy are particularly difficult,” the Minister said. “We have not had the kind of consultation with the public on assisted human reproduction in this country that the Minister for Health now envisages will happen.”

Ms Fitzgerald added: “Let me make the point that it is not yet in legislation and not yet a Government decision in terms of legislation that is in the heads of a Bill.”

Ms Creighton weighed in on the latest controversy over surrogacy, sparked on Wednesday by former justice minister Alan shatter.

Mr Shatter said he had included measures to deal with surrogacy in his draft version of the Children and Family Relationships Bill currently before the Dáil, provisions he said had been discussed last year by the Oireachtas justice committee.

In a stinging rebuke to Minister for Health Leo Varadkar who announced proposals to deal with surrogacy in separate legislation, Mr Shatter claimed the Minister was presenting as new measures he had already dealt with.

In the Dáil yesterday Ms Creighton said she was “deeply concerned” that surrogacy was now being dealt with separately from the Bill on family relationships, which reforms and updates family law to address the needs of children living in “diverse family types”.

She quoted comments the Taoiseach made in the Dáil last September when he expressed concerns about surrogacy being dealt with in the Bill: “I am concerned that if this is dealt with in the context of the Children and Family Relationships Bill, the process would be delayed and it would not be possible to ask a clear question in the context of the marriage equality referendum.”

Ms Creighton said she was a supporter of the marriage equality referendum and she intended to vote in favour of it.

But “what I deduce from that is that the Taoiseach is saying that since he wants the referendum to pass he will therefore muddy the water and leave the surrogacy issue until a later date. That is very dishonest.”