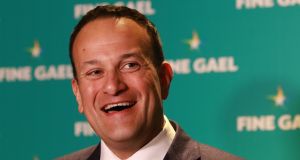 Taoiseach Leo Varadkar confirmed that just six pieces of priority legislation, mainly linked to Brexit are on the Dail schedule for the next term. Photograph: Karen Morgan/PA Wire

Taoiseach Leo Varadkar has rejected Fianna Fáil claims that he is reluctant to share basic information about contingency plans in the event of a no deal plan.

Mr Varadkar confirmed that just six pieces of priority legislation, mainly linked to Brexit are on the Dail schedule for the next term.

He told Fianna Fáil leader Micheál Martin that the Cabinet on Tuesday discussed the Common Travel Area, medicines, transport and the legislation that would be necessary to deal with Brexit.

Mr Martin accused the Taoiseach of showing a lack of respect for the public and the Dáil about the Government’s plans for a no-deal Brexit.

He said they could not influence events in Westminster which will on Tuesday evening vote on the UK government’s withdrawal agreement with the EU.

But he said they could affect how prepared Ireland is for all eventualities. He told Mr Varadkar “you haven’t been keen to share with the Dáil” the Government’s plans for a no deal Brexit and had given no details of the legislation in preparation.

Rejecting the charge the Taoiseach said he did not believe there would be no deal but the Government was preparing for all outcomes.

He said information had been supplied to the stakeholders’ forum and any Deputy requiring a briefing had been given one on all preparations for Brexit.

The Cabinet on Tuesday discussed the common travel area, medications, transport and the legislation required to deal with the situation.

He said one Brexit omnibus bill with 17 sections would be prepared.

He said that concerns were raised that stockpiling of medicines could itself lead to a shortage of necessary medications that had a short shelf life.

The Taoiseach said a watchlist of 24 medications had been established and that between 60 per cent and 70 per cent of medications transit the UK or originate in the UK.

Most of requirements at ports would be for parking bays and spaces and where planning permissions was required the Minister for Finance could use his powers in such situations.