Socialist Paul Murphy should have ‘courage and gumption’ to apologise, says Taoiseach 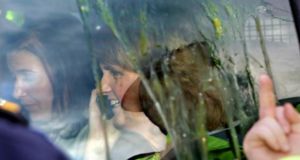 Protesters “descended” on the Tánaiste’s car “like hounds after a fox” and it was absolutely disgraceful, Taoiseach Enda Kenny has told the Dáil.

As the water charges controversy was raised again during leaders’ questions in the Dáil, Mr Kenny referred to the weekend incident in the Jobstown area of Co Dublin where Tánaiste Joan Burton was surrounded in her car by protestors for more than two hours.

Independent TD Mick Wallace said the vast majority of protests against water charges had been peaceful but Ms Burton shook her head at this. He said the Government should listen to the wishes of the people and abandon water charges and “confine Irish Water to the dustbin of history”.

Mr Kenny told the Wexford TD however he thought that “as a man of the people.....you would disassociate yourself completely with what happened at the weekend because the homophobic remarks, the taunting, the vicious language, the kicks and the belts given to people who were completely innocent.”

He said Mr Wallace “would not like to be hemmed in by a baying mob for two-and-a-half hours”.

Addressing Socialist TD Paul Murphy who was involved in Saturday’s protest and defended the treatment of the Tánaiste, Ms Kenny said: “Deputy Murphy, you should have the courage and the gumption to apologise unreservedly to An Tánaiste for what you caused over the weekend out in Jobstown.”

Mr Murphy shook his head and said “’no”.

The Taoiseach rejected Mr Wallace’s call to scrap water charges and Irish Water and said “the return in income tax starting in people’s cheques in January will far outweigh in a year the cost or the contribution to be made for Irish Water”.

Sinn Féin leader Gerry Adams also called on the Government to abandon the water charges and support his party’s bill to allow for a referendum to “embed the right to water” in the Constitution.

The thirty-fourth Amendment to the Constitution (No 3) Bill from Sinn Féin on such a referendum, will be debated later tonight during private member’s business.

But the Taoiseach reject ted the move for a referendum, said he would not support Sinn Féin’s Bill and told the House it would create difficulties in a number of areas including for private group water schemes, which received funding from the State.

Mr Adams asked what the Government would do on this issue if the Taoiseach would not support a referendum embedding the right to water in the Constitution “yet Labour supported this in the Seanad”.

But the Taoiseach reminded the Louth TD that “you yourself were advocating the payment of water charges and you then changed your mind when you heard the sound of marching feet”.

And that public roadways would not be blocked and that wasn’t the case. If you gave them instructions they didn’t carry out your instructions.

The Taoiseach added that during protests in Sligo yesterday gardaí had spoken to Sinn Féin public representatives who gave a commitment that public roadways would not be blocked “and that wasn’t the case”.

He described Mr Adams as a man who liked his instructions to be obeyed.