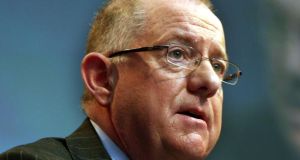 Minister for Foreign Affairs Charles Flanagan: Islamic State’s barbaric violence and culture of hatred is a threat to freedom and human dignity. Photograph: The Irish Times

Islamic State poses a “limited threat” to the EU and Ireland, Minister for Foreign Affairs Charlie Flanagan told the Seanad.

However, there could be little doubt of its ambitions to export its violence and terror to Europe, he said.

“The barbaric violence and culture of hatred which fuels its campaign of terror is utterly unacceptable to Ireland and the wider world and is a threat to the values and freedom and human dignity which we espouse,” added Mr Flanagan.

“Isis’s actions are harmful, first and foremost, to the people of the Middle East region, especially women and girls; ethnic and religious minorities such as Christians and Yezidis, members of the gay community and other vulnerable groups who are the principal victims of its inhumane actions.”

He said Ireland was working closely with its EU partners, and through the United Nations, to co-ordinate efforts and strengthen tools at its disposal in dealing with the Islamic State threat.

“While an attack on Ireland is possible, it is not assessed as likely and there is no specific information relating to a threat to Ireland,” he added.

Mr Flanagan said the activities of a small number of people in Ireland who supported extremists were closely monitored by An Garda Síochána.

Senator Paul Bradford, of Renua Ireland, said he was seriously concerned that, from an international perspective, neither the EU nor, in particular, the United States was taking with sufficient seriousness the profound threat to what he deemed to be the threat to civilisation being posed by Islamic State.

“When we hear of a group which brings along a body of six-year-old children to watch a beheading for educational purposes, we are starkly reminded of what we are dealing with,” he added.