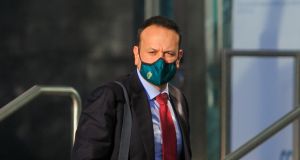 Tánaiste Leo Varadkar: “Any time I got those offers I passed them on to the agency. I certainly would not have got involved in discussions over money.” Photograph: Gareth Chaney/Collins

The decision by the Health Service Executive to award a €14 million ventilators contract to a company previously only known for organising Middle Eastern conferences has been questioned by TDs.

Expressing “serious concerns”, Social Democrats joint leader Róisín Shortall asked Tánaiste Leo Varadkar what he knew about the awarding of this contract when he was taoiseach.

Asking if there were contacts with him or with the then minister for health “or anybody else at a political level”, Ms Shorthall said the contract left the taxpayer “caught for a huge figure”.

The Dublin North West TD said the contract was placed with a company called Roqu with a residential apartment address in Dublin city centre and one employee, the owner of the company, Robert Quirke.

She said that Roqu had previously only been known for event management and organising festivals in the Middle East.

A subsidiary of Roqu was involved in a community-based Covid-19 testing programme in Roscommon, and in the development of the health passport app.

She said the Irish Council for Civil Liberties (ICCL) raised “serious data protection concerns about the testing project in Roscommon and the development of the health passport app.

“Both of those projects involved an element of health research that was retaining personal information and it would appear that there is not compliance in relation to data protection.”

Mr Varadkar told her that procurement and contracts are “done at agency level not at a political level”.

The Tánaiste said, “I do not have any particular recollection of any involvement in any contracts related to ventilators but I would have to check my records on that.”

He said there was a rush on to get ventilators quickly as well as personal protective equipment and it was a pressurised period.

The Government was getting a lot of offers of help at the time. “Any time I got those offers I passed them on to the agency. I certainly would not have got involved in discussions over money.

“Perhaps others did but I do not recollect that happening so I would have to check up on it.”

He said he remembered engaging with Medtronic on ventilators because it is a major company in the west of Ireland making ventilators and exporting them. “We wanted to make sure that we got our fair share of them for Ireland.”

Mr Varadkar said he would act on Ms Shortall’s request that the Minister for Health be contacted about the two projects “to ensure that everything is above board”.