Hospice beds will be cut next year, Micheál Martin warns 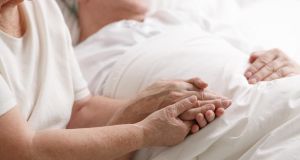 Taoiseach Leo Varadkar says such bodies “have a lot of autonomy to decide how that money is allocated”. Photograph: iStock

Hospice beds will be cut next year because of a reduction in State funding, Fianna Fáil leader Micheál Martin has warned.

“There are hundreds of other organisations across the country in a similar situation which provide disability services, addiction counselling and services for carers,’’ he added.

He said Taoiseach Leo Varadkar had added insult to injury some months ago by telling him they would not get pay restoration but he would not allow them to cut services either.

He said he wanted to know whether the Government would provide necessary funding to enable hospices, disability organisations, elderly care organisations and many more to pay their employees the same rate of restoration that was allowed for in the public service pay agreement.

Mr Varadkar said everybody in the Government, including himself, was aware of the wonderful work that the hospice movement did, not just in hospices themselves but also in hospice home care.

He said the issue Mr Martin referred to was the law around section 38 and section 39 bodies.

He said those who worked under section 39 provisions – often hospices, charities and other bodies – were not public servants.

“The way those bodies are funded is through a block grant from Government, and those bodies have a lot of autonomy to decide how that money is allocated.’’

Mr Martin said this was the dishonesty of the Government’s response.

Mr Varadkar said there were differences in pay between the public and private sectors.

“This, if you like, is part of a third sector, a voluntary sector, section 39, which is not part of the public service, and that is where the issue arises,’’ he added.