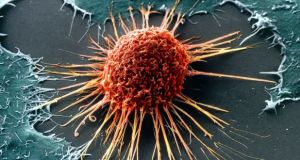 A cervical cancer cell. Social Democrats TD Catherine Murphy said a High Court case is to be taken to force the release of CervicalCheck smear test slides to women.

A High Court case is to be taken to force the release of CervicalCheck smear test slides to women who sought them more than six months ago, the Dáil has heard.

Social Democrats TD Catherine Murphy said that seven of the more than 220 women caught up in the CervicalCheck controversy had contacted her about the inordinate length of time they had waited “just to get access to their own medical information”.

She said these women, whose smear tests had been misread, were living in fear with some in the midst of very aggressive forms of cancer treatment. “Others are still dealing with side effects for those treatments. These people should not have to battle for anything else right now. Their entire focus should be on staying as well as possible.”

The Kildare North TD, who raised the issue last week in the Dáil, said there was a contradiction between what the Taoiseach, the Minister for Health, HSE officials and CervicalCheck were saying and “the lived reality for the women involved and their families”.

Leo Varadkar had agreed with her that there should be no further or undue delays. HSE officials appeared before the Public Accounts Committee last week and said the average waiting time for women who requested their slides was 22 days and that the HSE had put a specific unit in place to deal with the issue.

Ms Murphy said it was her understanding that the national screening service had ordered the laboratory Quest Diagnostics to stop releasing slides in August.

The Social Democrats TD said she spoke on Wednesday to the solicitor representing many of the women affected by the controversy and he said he was still seeking slides from as far back as April or May.

Ms Murphy said “the HSE has been put on notice that there will be a case in the High Court to demand these slides”.

“Why would that happen if this process was working satisfactorily?” she asked.

Replying for the Government, Tánaiste Simon Coveney said “we need to understand the detail of those cases and what the blockage is so we can act to remove the blockage as soon as possible”.

Mr Coveney said they had to protect the integrity of the process. “We cannot ignore the legal advice on this but I assure the Deputy the priority is to try to give people the respect they deserve and the access to the information that is their right as quickly as possible.”