Heatwave hits Seanad as deputies get hot under the collar

The Senators don’t pack up until next week, although acting cathaoirleach Denis O’Donovan wearily told them if they didn’t speed up they wouldn’t be going anywhere for a while 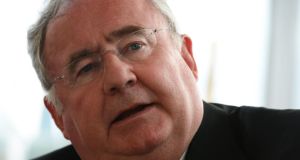 When is a sinkhole not a sinkhole? When it’s a depression.

As opposed to when it’s the Seanad – a political sinkhole which is also a pit of depression at the moment. Although Minister Pat Rabbitte didn’t say this yesterday. Not like him to miss a one-liner. It must have been the heat.

Fatigue has set in around Leinster House as the summer Oireachtas session nears a close. Barring the unexpected, the Dáil rises today and relieved deputies will run screaming to the hills until September.

Rabbitte put us all in a holiday mood with his talk of offshore exploration and sinking sands in beautiful Sruwaddacon Bay in Mayo. The Minister for Energy and Natural Resources may have been answering a question from Sinn Féin’s Michael Colreavy on the side-effects of drilling activity at the Corrib Gas project, but he conjured up visions of deck chairs in the sinking sand and offshore exploring in the rock pools.

Pat also mentioned boring machines, but that was just another reason to think of flip-flops and a chilled glass of something nice instead of droning deputies.

Nodding off
He treated Colreavy to a complicated and technical answer from the civil servants on the dipping sands of Sruwaddacon. At the end of it, Pat glanced up from his script and looked to the chair.

“If we have anybody left on Oireachtas Report at this stage Ceann Comhairle, they’ll certainly be fast asleep. I’m nodding off myself.”

Across the way in the Seanad they weren’t nodding off. In fact, the proceedings became quite heated as the Committee Stage of the Protection of Life During Pregnancy Bill moved along at a tortuous pace.

The Senators don’t pack up until next week, although acting cathaoirleach Denis O’Donovan wearily told them if they didn’t speed up they wouldn’t be going anywhere for a while. At their current pace, and with 85 amendments to be discussed, he reckoned it would take 22 days of 12-hour sessions to get through them all.

An amendment from a group of Independent Senators to include abortion in the case of fatal foetal abnormality and cases of rape or incest was defeated after hours of discussion. David Norris marked the result by loudly praising the two members of Fianna Fáil who supported it – Averil Power and Mary White – while noting that all the men had voted against.

Listowel’s Ned O’Sullivan, who wasn’t present, is Fianna Fáil’s male exception. In the afternoon, a number of female Senators became exasperated when speakers such as Fianna Fáil’s Brian Ó Domhnaill persisted with the view that the legislation would allow for the abortion of children who might be born with disabilities.

“The Senator is depriving future Special Olympic athletes from being born,” he told Aideen Hayden, to objections from Mary Moran and Jillian van Turnhout, among others.

Ó Domhnaill, stressing he is not a medical expert, urged Senators to acquaint themselves with “best medical practice”. He quoted recent literature saying women with a history of “prior induced abortion” suffer future medical consequences.

“The crux of the matter is, women who have an abortion, even for a possible fatal foetal abnormality, face a health risk in future pregnancies. There is a proven increased risk of ‘stillbirths, premature births, low birth-weight’ of future children, ‘cerebral palsy, and maternal deaths’.”

Hayden said she was horrified by what Ó Domhnaill was saying. “He suggested that every parent who has a disabled child is subject to the amendment. That is low, below the belt, uncalled for and demeans the chamber.”

Support groups
Fidelma Healy-Eames spoke of meeting the two support groups formed by women affected by fatal foetal abnormalities. One group had chosen to give birth to babies with little chance of living for long after birth while the others chose to travel abroad for a termination when they got their devastating diagnosis.

“The group that came across happier to me were the ones who gave birth. They cried with joy because they had reference points with their family. They had minutes together with their child. They had hours, and some had years, despite the diagnosis. That did not come across to me from the other group.”

And on and on it went.

But outside the impassioned arguments from both sides, another vote was concentrating minds in the Upper House – the one on the proposal to abolish the Seanad.

The Protection of Senatorial Life in Perpetuity Bill – now there’s a question which unites almost all of them. Government Senators are getting over their horror of the proposal by agreeing to put it to the people in the Taoiseach’s referendum.

But you won’t find them on the doorsteps arguing Enda’s case. Despite recent shenanigans, which may have drawn voters towards the abolition camp, the campaign to come may yet prove a difficult one for the Coalition to carry.