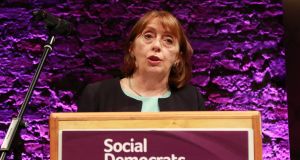 Social Democrats: Ms Shortall said that under her party’s legislation unpaid leave would be available to either or both parents. Photograph: Nick Bradshaw

Government policy is that parental leave should be introduced on a paid basis, Minister of State for Justice David Stanton has told the Dáil.

“The provision of paid leave would bring much greater benefits to parents and children at this stage than the further extension of unpaid leave,’’ he said.

Mr Stanton said the programme for government included a commitment to increase paid parental leave during the first year of a child’s life, as research showed it was of most benefit at that time.

He said an interdepartmental working group was working on proposals to give effect to the Government’s commitment and was expected to report by the end of April.

Mr Stanton said the Government would not oppose the Bill because it agreed with the party’s principle of improving family leave available to parents.

Ms Shortall said under her party’s legislation unpaid leave would be available to either or both parents.

“Working parents lead incredibly busy lives, constantly striving to balance the needs of their children with making ends meet and planning for the future,’’ she said. “The pressure can be enormous.’’

Ms Shortall said the high cost of childcare meant for both parents there was little financial gain from returning to work after the birth of a child.

“Some decided not to return at all for this reason,’’ she added.

Ms Murphy said the childcare issue was very much pushed to the centre in 2005, when two byelections were held in the commuter belt.

Yet, 13 years later, the issue was still being grappled with and the State had failed to deal with it in any kind of comprehensive way.

“Those who do manage to go back to work after having their children either pay what people describe as second mortgages or rely on family or friends to mind their children, particularly in the first year,’’ she added.

Ms Murphy said neither situation was ideal or desirable, but for so many families there was simply no other option.

She said many other countries had recognised the enormous payback, reaped from a societal point of view, when parents were supported to spend time with their children during the formative years.