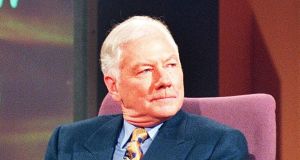 Politicians made tributes in the Dáil today to broadcaster Gay Byrne, who has died aged 85. Photograph: David Sleator

Tributes were paid in the Dáil today to broadcaster Gay Byrne, who was described as Ireland’s “original citizens’ assembly”, a change maker, national treasure and a colossus in the broadcasting world.

In a rare move in Leinster House, a book of condolences was opened in the main foyer for Mr Byrne, who died on Monday at the age of 85.

Ceann Comhairle Sean Ó Fearghaíl said there had been a national outpouring of respect and recognition for a colossus on the world stage of public service broadcasting.

He said “he gently touched the lives of generations” and his was the voice most heard in his home after family members.

Taoiseach Leo Varadkar expressed the country’s deep sadness on the death of the “most influential broadcaster in the history of the State” and a much loved figure who changed Irish society.

The story of his remarkable contribution “is a story of how we changed for the better as a society over the past 60 years”.

“He was an outlet for all those who were silenced” and afraid to speak up.

Mr Varadkar said that as minister for transport he re-appointed him as chairman of the Road Safety Authority and “his campaigning helped save many lives”.

The Taoiseach described him as a publicly spirited person, who also spoke up for whistle-blowers.

“He was a change maker and a force for good. And today a national treasure is gone.”

Fianna Fáil leader Micheál Martin said what set him apart was that he was a great listener.

And he said he was probably “our original citizens’ assembly” on societal issues, whose shows were rarely missed.

Sinn Féin leader Mary Lou McDonald said he “shifted a code of silence” and built a stage on which people could tell their story.

“His contribution was immense and enduring.”

Labour leader Brendan Howlin said he was reminded on the death of Gay Byrne of what Georges Pompidou said on the death of French president Charles De Gaulle – that “De Gaulle is dead, France is a widow”. Everyone has been affected by “Gaybo” who was the “soundtrack to all our lives”. He had met the broadcaster a number of times and he was always “polite, generous and professional”.

Rural Independents TD Mattie McGrath said that “like the gospel in the morning, you listened to Gaybo”.

Independent TD Thomas Pringle described him as “the dominant broadcaster in probably the whole of the 20th century”, who noted his connection to Donegal where his family has a holiday home.

Green Party leader Eamon Ryan said that as a public service broadcaster he had a “significant role in the development of our democracy”.

“It is important to remember at this time, where our value is on public service broadcasting.”

He added: “We will miss Gay Byrne and we need to bring back the importance of public service broadcasting.”