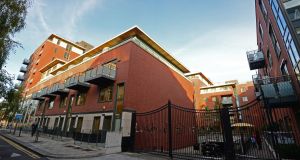 The number of apartment blocks and housing estates with building or fire safety defects is “quite low”, the Dáil has been told.

A fire safety taskforce established last year in the wake of the controversy over building standards at Priory Hall and Longboat Quay multi-unit developments in Dublin, did not recommend full investigations of all properties, Minister of State for Housing Damian English said.

He did not give figures, saying the work of the taskforce was ongoing. But he said the taskforce “doesn’t recommend that we have to have a full investigation of all properties because the number of defects that were identified were quite low, in my understanding”.

A number of buildings built during the boom have also been found to be substandard in terms of safety.

The Minister said some 500,000 people in Ireland live in about 200,000 apartments but he repeatedly stressed that the responsibility for buildings rested with the owners and management companies.

Fianna Fáil housing spokesman Darragh O’Brien said he was surprised that the number of defects identified was quite low. He suggested that it depended on “how seriously does one take the defects that are there”.

Mr O’Brien suggested the Minister was saying that as it was the responsibility of owners and management companies it was “just sink or swim.

“And the sinking fund for many of them is insufficient to deal with building defects, with fire safety. And if the bond holder, insurance company or builder does not come back, where will they do go?”

Mr O’Brien said “it’s a ticking time bomb for many of these management companies who are verging on insolvency and don’t have the money to carry out the works required”.

He said that homeowners were not abrogating responsibility but were looking for support.

Mr English said that “where apartment buildings are affected from a fire safety perspective and come to the attention of local authorities, the fire services offer to work with management companies and stakeholders to ensure an appropriate level of fire safety is achieved to minimise the effects to life”.

Mr O’Brien asked if they would get to a stage where there would be a regulator for owner management companies, to address such concerns.

The Minister said no final decision had been made on this but he said the Government had moved to comprehensively reform building regulations and was confident that in the future such building defects as had previously arisen, was “not going to be an issue”.

He said “that is something we continually must enforce through local authorities”.