John O’Donoghue ‘was not wanted on the ticket by the party nationally’, says FF source 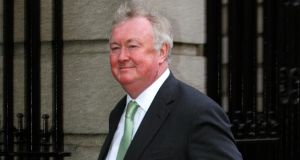 John O’Donoghue: his decision not to seek a Fianna Fáil nomination for the next general election clears the way for the party to run two candidates. Photograph: David Sleator

Former ceann comhairle John O’Donoghue’s decision not to seek a Fianna Fáil nomination for the next general election has cleared the way for the party to implement its two-candidate strategy in the new five-seat Kerry constituency.

“He was not wanted on the ticket by the party nationally,’’ said a Fianna Fáil source. “He resigned as ceann comhairle in a controversy over expenses and travel and his candidacy would have revived memories among voters of dark days for the party.’’

Mr O’Donoghue, who lost his seat at the last election, now practises as a barrister.

Seven candidates have been nominated for Sunday’s selection convention, which will choose one runner. The second candidate will be nominated by party headquarters.

The convention is expected to boil down to a battle for the nomination between Listowel’s Mr Brassil and Tralee’s Mr McEllistrim, a former TD. Whoever emerges as victor would be the candidate in the north of the county, with Ms Moriarty likely to be added to the ticket as the candidate from the south.

Ms Moriarty, a teacher in Kenmare and community activist, has been seen as a likely Dáil candidate since her election to Kerry County Council in the last local elections. She is regarded as ticking many electoral boxes, including gender and geography, as well as carrying no baggage in a party struggling to reinvent itself.