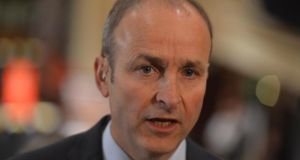 He will also be keeping an eye during the Oireachtas break on any announcements of future electoral intentions by the party’s Senators.

Although no party will admit it publicly, membership of the Seanad has long been considered an interim political job for aspiring TDs and those who have lost their Dáil seats and have a good chance of re-election.

Fine Gael used the Upper House to groom potential TDs in the aftermath of its poor performance in the 2002 general election, while Mr Martin did so less successfully following Fianna Fáil’s hammering in the last general election. An attempt to ease out long-serving Senators in favour of aspiring TDs in the subsequent Seanad election, largely failed. Mr Martin’s decision to recommend support for 10 Seanad candidates caused resentment and backfired when Denis O’Donovan, Jim Walsh and Paschal Mooney, who had not featured on his list, won seats in the agricultural panel.

Mr O’Donovan, from Cork South West and considered a Martin supporter, said at the time that the party leader had listened to advice which was “probably knee-jerk and illogical’’.

“I know of Senators who are in contact with the new councillors in anticipation of running again,’’ the source added.

A Fianna Fáil Senator privately said that while the party anticipated significant gains in the general election, there would be constituencies where a failed candidate would be seen as a good Seanad prospect by the party leadership and headquarters.

The Senator said that while the main focus was on preparing for the general election, a “day of reckoning’’ would inevitably come with the Seanad elections which follow. “If there is a showdown between the leadership and the lifers in the Seanad, expect blood to flow again.’’

An analysis of the likely electoral intentions of the party’s 14 Senators shows a significant number who would be viewed as seeing their political home in the Seanad.

Oliver Callan: ‘I was a perfect candidate for exploitation’