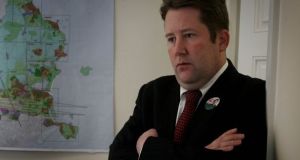 The Solidarity party organised “campaigns’’ about the jury selection process in the recent Jobstown trial, Fianna Fáil TD Darragh O’Brien has claimed in the Dáil.

Mr O’Brien had said the campaigns were about the “intimidation” of jury members but later withdrew this claim after the intervention of Independent TD Catherine Connolly, who was standing in for the Ceann Comhairle.

Solidarity TD Paul Murphy was last week acquitted, along with with five other men, of the false imprisonment of the then tánaiste Joan Burton and her assistant Karen O’Connell during a water charges protest in November 2014 at Jobstown in west Dublin.

Mr O’Brien made his remarks on Wednesday during the resumed debate on the judicial appointments Bill, which is being supported by Solidarity and Sinn Féin and opposed by Fianna Fáil.

The Bill provides for the selection of judges by a commission with a lay majority.

Mr O’Brien said Solidarity were the people supporting changes to the judicial appointments system proposed by the Government.

Addressing the Government benches, he said: “That is the group of people you are depending on to actually get this flawed legislation through the Dáil.’’

“What this Government is doing is taking a wrecking ball to the judicial system here on the basis of a personal crusade by Shane Ross, ’’ he added.

He said the Minister for Transport who was seeking the legislation to overhaul judicial appointments, was being supported by Sinn Féin and the Solidarity party.

He challenged Government speakers to list judicial appointments which they thought were incorrect.

“I believe the judiciary has served this State very well,’’ he added.

“Others may not because of the DNA within their own political movements who have late in the day maybe come round to recognising the courts and the State.’’

The reality, he said, was the Jobstown Not Guilty Campaign had campaigned against an attempt to stack the jury against those charged.

That would have included excluding people from the Jobstown, Tallaght area, people who were active in groups for and against water charges, and those who had expressed themselves in public or in social media on water charges, said Mr Murphy.

He said the public campaign was necessary and in advance of any jury or juror being chosen in the case.

The jury system was robust and had seen the evidence over 10 weeks, he said.