Facial covering likely to be ‘allowed and encouraged’ from next week, Dáil told 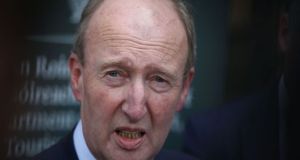 Minister for Transport Shane Ross called on TDs not to exaggerate the problem of passengers arriving in Ireland unchecked. File photograph: Nick Bradshaw

Minister for Transport Shane Ross has said it was likely that “facial coverings will be allowed and encouraged” on public transport and in shops, from next week.

He said Chief Medical Officer was likely to make a recommendation that their use be encouraged.

He was speaking during a debate on the impact of the Covid-19 pandemic on transport. It was the Minister’s first appearance in the Dáil since the crisis began as Mr Ross, who lost his Dáil seat in the general election, had been cocooning at home.

He also called on TDs not to exaggerate the problem of passengers arriving in Ireland unchecked.

He acknowledged there was a problem with passenger locator forms but he said the airports were “virtually closed” and “to say that there’s great masses of hundreds of thousands of people coming in unnoticed is not true”.

He said the issue with forms was being investigated and addressed. Consideration was being given to make it mandatory to fill them in and the Departments of Justice, Health, Transport and Foreign Affairs had met on the issue.

Fine Gael TD Emer Higgins claimed that “passengers can waltz through our airports, claim they are travelling to Northern Ireland and not have to comply with any restrictions, regardless of the threat they pose to this island”.

She said “allowing an optional form govern people’s responsibilities to self isolate on arrival into Ireland is an insult.

“It’s an insult to everyone who has spent weeks trapped in their home, to our frontline workers who’ve been risking their health to protect and to help others, to the families of the 1,488 people who have died with coronavirus.”

She questioned whether making it obligatory to complete the form was enough.

“Do we not need emergency legislation to force passengers to provide the address they will self-isolate at and system in place to police that?”

The Dublin Mid-West TD said it was less than three months “since the first passenger with Covid-19 travelled through Dublin Airport.

“A small number of passengers like this brought this virus to our shores. Less than three months later, we now have over 23,000 confirmed cases and tragically 1,500 deaths.”

She said Ryanair planned to run 90 per cent of its flights soon and passenger numbers “will soar again soon”.

Sinn Féin TD Darren O’Rourke said the controls at ports and airports including the public health passenger locator form have “proven entirely inadequate” in light of reports that a third of passengers did not fill up the forms and a further third did not answer their phone when followed up.

He asked if protocols were being developed including provision for temperature checks and plans for 14-day isolation periods.

Calling on TDs not to exaggerate the numbers of passengers coming through unchecked, he said “there obviously were some locator forms being missed and the reasons for it are being investigated”.

It could have been that forms were being handed out at the point of departure or in some cases possibly, they might not have been handed out, he said.

They were looking at the possibility of making it mandatory for people fill in the forms “so the gardaí can follow up, make telephone calls, they can do spot checks so that it can be absolutely certain that this is being enforced”.