The Panti affair was raised by TDs in the Dail, including Fine Gael’s Jerry Buttimer, who said he has been “beaten, spat on, chased, harassed and mocked” for being gay, and Labour’s John Lyons, who said he had been subjected to verbal abuse. 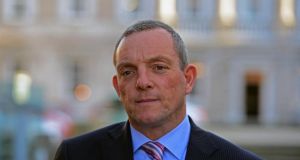 Cork South-Central Fine Gael TD Jerry Buttimer said: “I speak here not just as a gay person but as a member of society who wants to be treated equally.” Photograph: Eric Luke.

Two TDs have spoken during an emotionally charged Dáil debate about how they have been harassed because they are gay.

Labour TD John Lyons and Fine Gael’s Jerry Buttimer were among seven TDs who criticised the recent RTÉ decision to pay €85,000 to Iona Institute members and Irish Times columnist John Waters over comments made by performer Rory O’Neill, known as Panti Bliss, during an interview on The Saturday Night Show.

Minister for Communications Pat Rabbitte told the House he planned to make a number of changes to the broadcasting Act, “including an amendment that would require broadcasters to avoid causing undue offence”.

Mr Rabbitte said that defamation laws were outside his remit, but the Broadcasting Act was not.

He said section 39 of the Act required every broadcaster to ensure that nothing was broadcast that might reasonably be regarded as causing offence.

“That seems to me to be a unfeasibly rigorous approach. We all know how easy it is for some people to be offended even where offence was not intended and is not objectively ascertainable.”

Mr Rabbitte said he would be proposing miscellaneous amendments to the legislation. “That seems to me to be more objective and more in tune with the realities of public debate.”

The Minister added that he had “no role in managing editorial matters, making decisions around programming or dealing with litigation claims. I therefore have no intention of interfering in RTÉ’s management of this specific file.”

The Dublin North West TD said only recently he had walked from his own house to a shop “where a bunch of teenagers called me gay or some other name they call us. I thought I was living in a society where this stuff isn’t acceptable anymore.”

He said the broadcaster “needs to come out and let us know that they got it wrong. Otherwise there will not be confidence in RTÉ to mediate any debate with confidence, particularly around issues that affect my life and the people who love me and love all the other people who aren’t treated properly in this society.”

Mr Buttimer said “RTÉ got it wrong, they got it completely wrong and they folded their tent in. And in this House in this Oireachtas we were told as gay people that it’s a matter of social re-engineering by the gay ideological movement. And I’m quoting from a member of the Seanad.”

In a forthright contribution on the issue, the Cork South-Central TD said: “I speak here not just as a gay person but as a member of society who wants to be treated equally. I’ve been beaten, spat (at), chased, harassed and mocked like Deputy Lyons because of who I am.

“I was born with a gift given to me and I spent most of my life struggling and finding a place in my own country, which I love, to be accepted.”

He noted the support of his colleagues who also criticised the RTÉ decision in the Dáil including Sinn Féin TD Michael Colreavy, Independents Clare Daly, Luke ‘Ming’ Flanagan, Mick Wallace and Catherine Murphy.

Mr Colreavy said “this country has had a poor history of censorship” and it “should not be case that those who call homophobia out for what it is that suffer the censorship”.

1 Hotels, retail, hairdressers, churches, gyms to open next Tuesday, followed by restaurants and gastropubs on Friday
2 Brexit talks: UK seeks to strip fishermen of 80% of fish caught in EU waters
3 Exiting Level 5: What will reopen and when will it happen?
4 Forget Black Friday, welcome to Green Friday - 30 Irish retailers with great deals
5 Austria bids farewell to Fucking after a millennium of misunderstandings
Real news has value SUBSCRIBE