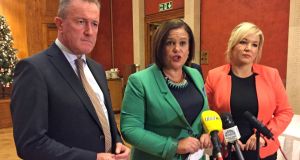 Sinn Féin leader Mary Lou McDonald said Micheal Martin was ‘in cloud cuckoo land if he thinks there could be an agreed all-of-Executive position on Brexit with the stance that has been taken by the DUP’. Photograph: David Young/PA Wire

Sinn Féin leader Mary Lou McDonald was challenged by the Taoiseach about the power of “senior republicans” in deciding her party’s policy.

Leo Varadkar said there was “documentary evidence that Sinn Féin ministers seek approval and consent from senior republicans when it comes to major decisions in government”.

He asked Ms McDonald to what extent she and her colleagues required approval from those republicans.

He referred to the issue as both he and Fianna Fáil leader Micheál Martin rounded on Sinn Féin over the collapse of the Northern Executive and Assembly and the lack of a voice in the North for anti-Brexit opinion.

During sharp exchanges Mr Varadkar said that he had followed the inquiry in the North into the renewable heating incentive, dubbed the “cash for ash” scandal which resulted in the collapse of the Northern Executive in January last year.

He said Sinn Féin’s involvement in the scheme was “much greater than we realised at the time” and he was “particularly interested to read” about the email correspondence, revealed during the inquiry, between then Sinn Féin minister for finance Mairtín Ó Muilleoir and Ted Howell “a senior republican” who held “no elected office whatsoever”.

In the email Mr Ó Muilleoir asked if Mr Howell was content for him to “sign off the business plan on Wednesday”, the Taoiseach said, adding that that was “documentary evidence that Sinn Féin ministers seek approval and consent from senior republicans when it comes to major decisions in government”.

“I would be curious to know if Deputy McDonald would want to comment on that, or expand on that, and maybe inform us of the extent she and her front bench require approval from senior republicans for decisions,” the Taoiseach added.

Ms McDonald told him that when the inquiry reported on the renewable heat scandal “I believe it will record the central role of the DUP in the affair. At that stage you can make your assessment on an informed basis.”

Mr Martin claimed Sinn Féin contrived the collapse of the Northern institutions and had been involved in trying to extend the renewable heat initiative.

He said Brexit had polarised the two communities in the North “in the absence of any real politics”.

She said that unlike Fine Gael and Fianna Fáil her party actually represented people in the North of Ireland and had a democratic mandate.

Ms McDonald added that Mr Martin was “in cloud cuckoo land if he thinks there could be an agreed all-of-Executive position on Brexit with the stance that has been taken by the DUP”.

Sinn Féin was ready to try again to get the Executive and Assembly up and running and nobody was more disappointed than she was that the agreement they almost reached with the DUP earlier this year had failed.