Coalition out of touch with commercial realities, says FG TD 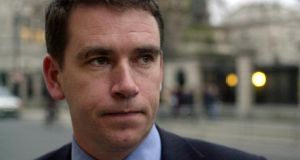 The Government has shown a disappointing lack of appreciation of what businesses are going through in its approach to commercial rates, a Fine Gael TD has said.

Waterford TD John Deasy expressed concern about the way commercial rates would be imposed on businesses with the introduction of the Local Government Bill.

The Bill provides for the amalgamation of a number of local authorities and dissolving 80 town councils and replacing them with municipal districts.

Mr Deasy said the commercial rates section of the Bill “must be completely rewritten”.

He said that section “is inconsistent with the realities of what is happening on high streets nationwide and notwithstanding the 10-year adjustment” in rates when districts which levy different rates are amalgamated.

He said internet companies paid no commercial rates yet bricks and mortar businesses had to pay. In 2012 online shoppers in Ireland spent €3.7 billion across a range of services and this trend was growing.

He was speaking during the second day of debate on the Bill which Minister for the Environment Phil Hogan described as providing for “the most fundamental overhaul of the local government sector in 100 years”.

He said it would bring the Irish local government system into the 21st century so it was more representative of and more responsive to the needs of citizens and communities.

Mr Hogan said the legislation would reduce the layers of administrative duplication, address unbalanced representation and remove other long-standing anomalies by dissolving the 80 town councils and replacing them with municipal districts.

“Under this new system of municipal districts, councillors will work more directly for the interests of their communities across the country rather than working as dependent agents of central government.”

Fianna Fáil’s Sean Fleming said, however, that the Bill “is well dressed up as a reform of local government but it is no more than an attack on local democracy”.

Real functions
Party spokesman on reform, Mr Fleming said there was nothing in the legislation about the real functions of local authorities, and on January 1st all powers in respect of water, sewage, and waste-water services would be transferring to Irish Water. “We have seen a diminution in the authority of local authorities.”

Dara Calleary (FF, Mayo) said that rather than putting people first “it seems the people are being left behind by this Bill”. This was done through the abolition of town councils and the “absolute ignorance of those in the Department of Environment and those who drafted the legislation of the invaluable role that a good, performing town council can play as an economic development unit and as a unit for citizen participation”.

He said Dublin would rightly get to vote on the kind of mayor they wanted but “those of us who live in a town or borough council area will lose our mayor and our councillors without any consultation”.

Fine Gael TD Noel Harrington welcomed the legislation as reforming but in reference to plans on saving money, he called for a far more efficient whistleblowing system within local authorities.

Huge drop in cases of young people addicted to heroin 17:09
Man accused of sexually assaulting young girl denies he was ever alone with her 16:58
Supreme Court to hear State appeal over refugee marriage laws 16:55
Commuter communities being ‘sucked into Dublin’ - Howlin 16:52
Talks to resolve Limerick FC’s action against FAI to continue over weekend 15:55
SUBSCRIBER ONLY