Dún Laoghaire Harbour company ‘a gift and a jewel’ for locals 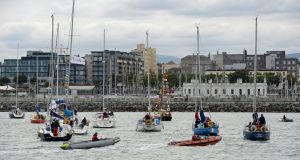 The people of Dún Laoghaire Rathdown are getting “a gift and a jewel” in the transfer of the Dún Laoghaire Harbour company to the county council, Minister for Transport Shane Ross has insisted.

He confirmed that he had on Wednesday formally signed the transfer of the harbour company’s functions to the county council.

Mr Ross rejected claims that the company had €33 million in liabilities and insisted it was closer to €10 million which would extend over a long period of time for repairs and maintenance.

He stressed that it will not affect local property tax or local projects and the transfer included a “seven-digit cash reserve”.

The Minister was speaking during a heated Seanad debate on the company’s transfer.

“It’s a gift and a jewel being given to the people of Dún Laoghaire Rathdown,” he said. “This is a great deal for the citizens and residents.”

Green Party Senator Grace O’Sullivan said that since the ferry service ended in 2015 “the harbour company has attempted a number of far-fetched money making schemes. There was the floating hotel, the floating swimming pool, the floating housing estate and a cruise ship dock that would have filled the harbour.

“All these schemes failed, leaving a trail of debt,” she pointed out and expressed concern that a “cash-strapped council would have to cover these costs rather than the exchequer since it was a State entity that ran up these bills”.

Independent Senator Victor Boyhan hit out at the Minister and his predecessors Leo Varadkar and Paschal Donohoe, claiming that all three as minister for transport “were aware that this company had major financial issues and major governance issues”.

Fianna Fail Senator Gerry Horkan was concerned that up to the signing of the transfer there had not been full sight of the assets and there was “an estimated of maybe €33 million in liabilities in pensions and other infrastructural costs”.

There was also a €800,000 annual maintenance cost. “How is that to be absorbed without closing libraries, not repairing footpaths, not improving traffic lights, maybe not building swimming pools.”

Fine Gael Senator Neale Richmond asked if there would be an indemnity for the council on claims already underway against the harbour company. He also queried why the port company was subsumed rather than a transfer of the shareholding function.

Sinn Féin Senator Fintan Warfield called for new consideration to be given to proposals for a new national diaspora centre and to engage with the Genealogical Society about the issue.

Labour Senator Kevin Humphreys said “this smells to the high heavens” and he asked if it was the case that Dublin Port Company was approached to take over the harbour company but that when it did a risk assessment it “walked away and now the council is being stuck with the risk”.

But the Minister described the Senators’ complaints as “politically opportunistic” and “deliberately mischievous” when local councillors had voted by a massive majority to support the transfer.

They were handing over an asset rich company of up to €40 million with a single asset worth €12 million.

“It’s a gift and a jewel being given to the people of Dún Laoghaire Rathdown but it just doesn’t suit some people to acknowledge that.”