Dáil to vote on allowing secret ballot on Ceann Comhairle 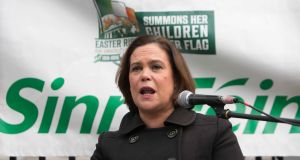 Sinn Féin vice-president Mary Lou McDonald: accused the Government of ignoring the constitutional convention’s recommendations and reports, saying “No one signed up to this process to be ignored, sidelined, second-guessed or patronised.” Photograph: Gareth Chaney/Collins

The Dáil will vote next week on the proposal to elect the ceann comhairle by secret ballot.

The ceann comhairle, who presides over Dáil proceedings, is currently elected by TDs after being nominated by the taoiseach of the day.

Government Chief Whip Paul Kehoe confirmed the vote would take place next week, making the next Dáil the first to elect a ceann comhairle in a secret ballot.

He was speaking during a debate on the final reports of the constitutional convention, which was established by the Government to consider eight specific issues, and comprised 66 randomly selected citizens, 33 politicians from both sides of the Border and an independent chairman.

But Opposition TDs sharply criticised the Government for showing a lack of respect for the convention and of failing to engage properly in the process.

One of the report’s recommendations included a secret ballot to allow for greater Dáil independence.

The former clerk of the Dáil, Kieran Coughlan, last week questioned whether changes to the election of the ceann comhairle could be made without a referendum, but Mr Kehoe said the Government proposed to bring a new standing order to the House next week on which TDs would vote.

Minister of State for Environment Ann Phelan said it would be for the next government to decide on the issue of votes for the diaspora, following a recommendation by the convention that they should be allowed vote in presidential elections.

Ms Phelan said such a move would require a constitutional change and a full analysis was under way. She said there were considerable challenges in extending the franchise to citizens in Northern Ireland.

“These are detailed reports to which a massive amount of expertise, deliberation and, not least, the valuable time and energy of the 66 ordinary citizens who participated in the forum were given.

“It is shameful that the Government thinks that by holding this debate today it is giving due consideration to these reports. Now it believes it is free to shelve them.”

“No one signed up to this process to be ignored, sidelined, second-guessed or patronised,” she said.

Independent TD Maureen O’Sullivan also accused the Government of showing a lack of respect for the convention.

Nine reports were published, but only five were debated in the Dáil and there was now a rush to debate the remaining four topics, she said.