Government accused of cover-up and misleading Dáil in Siteserv controversy

The Dáil is suspended following an exchange between Fianna Fáil public expenditure and reform spokesman Sean Fleming and Minister for Communications Alex White. 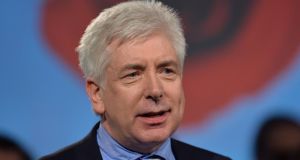 Alex White, Minister for Communication, stressed that the Government had no statutory role in directing banks to cut their interest rate charges.Photograph: Alan Betson / The Irish Times

The Dáil was suspended on Thursday after a row over the standard variable rates charged by banks in Ireland.

The five-minute suspension followed a row over the Government’s actions to deal with the significantly higher interest rates Irish homeowners paid compared to other householders in the eurozone.

Fianna Fáil public expenditure and reform spokesman Sean Fleming demanded action from the Government to deal with the issue, threatening that the party would not let the matter go until it forced the Coalition to act.

Minister for Communications Alex White stressed the Government had no statutory role in directing banks to cut rates.

There were heated exchanges and Mr Fleming refused to sit down. Leas Cheann Comhairle Micheál Kitt repeatedly urged Mr Fleming to sit down, but without success and he suspended proceedings for five minutes.

Mr White repeated that the Central Bank would present the results of research on the issue to the Minister for Finance Michael Noonan “in the coming weeks”.

He said Mr Noonan had given a commitment to start discussions with the six main lenders on the issue and “looks forward to hearing their plans on reducing the interest rates”.

Mr Fleming said the Minister’s response did not address the issue at all. “The banks have already indicated that they’re not going to take on board the Minister’s concerns,” he said

The Laois-Offaly TD expressed disappointment in Mr White’s response because it was an answer that could have been given last November. He accused Mr White of behaving like a “ventriloquist’s dummy” in reading out an official reply, which he claimed the Minister did not believe in.

Mr White quoted Mr Noonan as saying that he would call in the six banks and have a discussion with them about rates. He said people might see that as putting pressure on the banks but Mr Noonan views it as a discussion and he looked forward to hearing the banks’ proposals for cutting the rates.

Later, Sinn Féin enterprise spokesman Peadar Tóibín accused Fine Gale of becoming “more Fianna Fáil than Fianna Fáil themselves and Labour was “as much use as a mudguard on a tortoise”.

The Meath West TD claimed the Government was elected to “smash the golden circle” and close Anglo Irish Bank. But the Government was no different from the previous administration, he claimed, as he cited the controversial sale of constructions services company Siteserv.

He said the Dáil had been “misled” on the issue and accused the Government of “cover-up”.

Mr Tóibín asked if the Minister was happy that the Government’s review into the controversial sale of Siteserv was a proper review when it was being conducted by KPMG, which was involved in the sale.

He also asked that shareholder activity should be included in the investigation.

Mr White retaliated by hitting out at Sinn Féin and claiming there would be no recovery if they listened to Sinn Féin of implemented their policies.

The Minister said the purpose of the review was to determine if there were deficiencies in how the sale was conducted and if it was commercially sound.

He said KPMG was suitable to conduct the review with all the documentation at their disposal. He said a retired High Court judge would be involved to ensure no conflict of interest.

Mr Tóibín said the Minister “dodged” the question as to whether the inquiry was independent, but Mr White then insisted it would be independent.

Describing the Minister for Finance as “Michael hands-off Noonan” Mr Tóibín made his allegations that the Dáil was misled.

He asked if the Minister would inform the Dáil if members of the Cabinet was aware of any individual who was a Siteserv shareholder who would have had access to IBRC information about the sale.

Mr White said however it was a classic tactic of Sinn Féin to level allegations that had no grounds, masquerading as a question. And he insisted there were absolutely no grounds to the allegations.

Socialist Party TD Clare Daly hit out at the Government’s approach to the tendering for privatisation of 10 per cent of Dublin Bus and Bus Éireann routes.

Ms Daly insisted there was “nothing in the EU directive that demands competitive tendering” for Dublin Bus and Bus Éireann, a claim she said the Government made.

She said no worker could believe the Government’s assurances that their terms and conditions would not be affected if they moved following the tendering process and their pensions would be secure.

She asked how they could believe that following what happened for Team Aer Lingus when workers’ jobs were outsourced and she said the guarantees they received were worthless.

Mr White said planned strike action was it was “very regrettable”. He said he was not in the business of blaming anyone. He hoped it would be possible soon for the parties to sit around the table and discuss the issues and reach agreement.