Dáil suspended for 10 minutes in row over Ibrahim Halawa 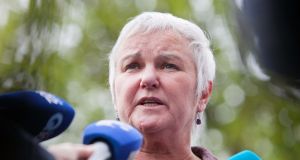 People Before Profit TD Bríd Smith raised the issue of Ibrahim Halawa whose trial in Egypt was suspended on Wednesday for the 20th time. File photograph: Gareth Chaney Collins

The Dáil was suspended for 10 minutes in a row over Ibrahim Halawa.

Ceann Comhairle Seán Ó Fearghaíl adjourned proceedings after People Before Profit TD Bríd Smith refused to sit down when he ruled her out of order.

Ms Smith had raised the issue of the 21-year-old Irish man whose trial in Egypt was suspended on Wednesday for the 20th time.

When Mr Ó Fearghaíl said the issue was not appropriate to the order of business Ms Smith accused him of trying to shut down debate on the plight of Mr Halawa who has been jailed in Cairo since August 2013.

He was arrested in a mosque during protests as the Muslim Brotherhood held a “day of rage” over the removal of then president Mohamed Morsi from office.

The 21-year-old is on hunger strike and the Government has asked the Chief Medical Officer to send an independent medical expert to Egypt to assess his health.

Ms Smith asked if there was some mechanism that could be found for the State to intervene in the Egyptian legal system because of the continued delays, the conditions Mr Halawa was being held in and his health.

Mr Halawa has gone on hunger strike in protest at his continued detention.

The Ceann Comhairle then said Ms Smith had accused him of suppressing the issue.

“I really do protest the way you’re treating the issue,” Ms Smith said, before she left the chamber.

Mr Ó Fearghaíl said he had on Thursday morning tried to convene a meeting of the delegation that had travelled to Cairo “and only one member was available to attend. So I will not accept from you that I’m trying to suppress a debate. I’m implementing the rules of the House.”