Dáil Sketch: Not a shred of truth in Brian Crowley shift from ALDI

Chief whip Seán Ó Fearghaíl said the party was “reeling” and “bewildered” by Crowley’s actions, which suggests the Soldiers of Destiny ought to get out more 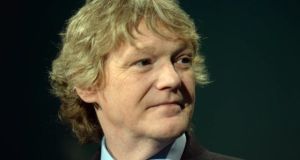 The bigger, more interesting question to emerge from this minor political kerfuffle was this: what has Brian Crowley been doing in Europe for the past 20 years? Photograph: Cyril Byrne

MEP throws in his lot with “a crowd of headbangers”. Then he ups and leaves Fianna Fáil anyway. That’s politics for you.

Fianna Fáil was stunned by Brian Crowley’s decision to sign up with a right-wing political group in the European Parliament, abandoning the liberal alliance to which his party is affiliated.

We heard yesterday that the serial MEP for Ireland South (he’s been hoovering up votes for 20 years) was in hospital receiving treatment for a leg problem.

But then people in Leinster House kept telling us that Brian had left ALDI. Defected to another supermarket, apparently.

Hardly headline news. But it had them in a right tizzy in Fianna Fáil.

Chief whip Seán Ó Fearghaíl declared the party was “reeling” and “bewildered” by Crowley’s actions, which suggests that the Soldiers of Destiny ought to get out more.

They said his defection from ALDI to some outfit called ECR (an overseas supermarket we have not heard of) was an “extraordinary development”.

What was Micheál Martin going to do about this? Take away Brian’s loyalty card and bonus club points? The parliamentary party met in the early afternoon to consider this very grave situation.

But the rest of Leinster House struggled to find intrigue in the story of one self-absorbed MEP’s moment of petulance, particularly when everyone realised that Crowley was leaving a political grouping called ALDE, and not a Cork branch of the well-known German grocery discounter.

Even the scandalised Ó Fearghaíl’s characterisation of their erstwhile MEP’s new chums in the ECR as “a crowd of headbangers” couldn’t generate much excitement.

Still, at least this would give Micheál Martin a chance to show some backbone.

He would have to take decisive action in the face of such gross insubordination from Crowley, who never took much notice of his leader anyway.

In the end, though, Micheál didn’t even have to order the Corkman to wheel himself, his wheelchair, his golden curls and enormous vote surplus out of the parliamentary party. Under the rules, Crowley was deemed to have kicked himself out.

Once he made his decision to elope with the Torys and a colourful assortment of far-right loolahs, Brian was no longer welcome in the Fianna Fáil parliamentary party.

Meanwhile, the Fianna Fáil leader, who managed to join some of his reeling and bewildered colleagues in the chamber for the afternoon session, returned to a subject which is dear to his heart ever since Fine Gael came to power.

Micheál has been very hurt by suggestions from Enda Kenny that Fianna Fáil disposed of incriminating documents to do with the banking crisis before they left Government Buildings.

The Taoiseach is fond of dropping heavy hints about shredders working overtime and things dropping forever behind filing cabinets and radiators.

But Micheál has been doing some research, and he says he has received confirmation from none other than the secretary general to the Government that not one file was “disappeared” or tampered with by the fleeing Fianna Fáilers in 2011.

This was just further proof of Enda’s tendency to indulge in “low partisan politics”. The Taoiseach dismissed this terrible charge. Hasn’t he put together the wonderful all-party, all-singing, all-dancing, all-sewn up banking inquiry as proof of his non-partisan nature.

Joe Higgins, who got a late call-up to join the banking panel, burst out laughing. Micheál is still hurting about those allegations about disposing of the evidence. “ ‘Shredded’ you said,” hollered Micheál. “That was a slur on the previous taoiseach. There is no other way of putting it.”

Given that unfortunate radio interview given by Brian Cowen in the days before his government collapsed, perhaps slur was not the right word to use. If Enda was “man enough” he would apologise for casting such aspersions.

But the Taoiseach didn’t think much of the documents obtained by Micheál under the Freedom of Information Act. “Inconsequential,” he shrugged.

With the “most serious economic catastrophe” ever to befall the nation unfolding at the time, Enda was surprised that there wasn’t more documentary evidence of meetings with bankers and the like.

“Perhaps they were written in invisible ink,” suggested Higgins, who has cheered up considerably since winning his cap for the banking inquiry.

Maureen O’Sullivan spoke about the 1916 centenary celebrations and argued passionately for suitable work to be undertaken on the historic site in Moore Street, where the fighting ended.

The buildings should be preserved as a proper and dignified memorial to the men and women of 1916, she said, and the project now requires the leadership and direction of the Taoiseach.

“We do not want Moore Street to become like Wood Quay, when we lost so much of Viking Dublin.”

The Taoiseach was sympathetic. “We must do the best we can in the interest of what happened. This is our capital city and is part of our history. We want to build on that for a new foundation for the future.”