Dáil row over women on maternity leave unable to get payment 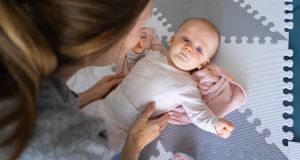 Minister tells Fianna Fáil finance spokesman that intention of emergency legislation ‘was to treat all of our citizens and employees equally’. File photograph: Getty

There were sharp exchanges between Minister for Finance Paschal Donohoe and Sinn Féin TD David Cullinane about women on maternity leave who are not able to access the temporary wage income support scheme.

Mr Donohoe had said he was examining the issue with his department and the Revenue Commissioners about “whether there is a way to resolve it”.

A number of TDs had raised concerns during the Dáil debate on coronavirus about the impact on women on maternity leave who were not entitled to receive the State support.

Mr Donohoe told Fianna Fáil finance spokesman Michael McGrath that the intention of the emergency legislation to support workers through the pandemic “was to treat all of our citizens and employees equally”.

Mr McGrath asked if a change in legislation was required or if the Revenue could deal with it on an administrative basis.

The Minister was examining with his department and Revenue “whether there is a way to resolve it”.

But Mr Cullinane said the matter could be resolved without legislation. The Waterford TD said the Minister had already instructed Revenue to use a mechanism to increase the wage-income subsidy from 70 per cent to 85 per cent and said Mr Donohoe “can use the same mechanism to instruct Revenue to deal with the issue of women on maternity benefit” and sort the matter quickly.

He said there was cross-party consensus “that the current position is unacceptable and discriminatory”.

The Minister said, however, that the increase in benefit did not change the eligibility criteria or number of people able to access it. He added that if he could have given a clear answer on dealing with the issue by administrative means he would have done so.

He said “may Deputy Cullinane could tell me whether, if it turns out that legislation is needed, he would support the formation of a new government that he would not be part of in order to allow us to deal with this issue”.

Mr Cullinane replied that “smart alec answers about government formation don’t cut it when we are dealing with women on maternity leave”. He said Fine Gael refused to talk to Sinn Féin “so let’s stop the nonsense”.

Mr Donohoe said it “sometimes seems that Sinn Féin thinks it’s the only party that can make political points about anything”. He said it is “my intention that all people will be treated equally under this legislation”. The Minister added that “I will not allow any allegation to be created in the development of this issue to the effect that it is my intention to not treat people in a way that is not fair or respectful”.

He said the issue was being examined and “it is perfectly appropriate for me to ask that if it turns out that I am not be able to deal with this issue in the way I want, I will ask for co-operation in dealing with it”.