A fiery exchange between Taoiseach Leo Varadkar and Sinn Fein leader Mary Lou McDonald took place in the Dail as Varadkar defended his remarks that he is open to considering a review clause in the Brexit withdrawal agreement. Video: Oireachtas TV 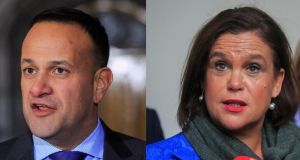 Taoiseach Leo Varadkar has staunchly defended his remarks that he is open to considering a review clause in the Brexit withdrawal agreement.

Mr Varadkar said such a clause might be to Ireland’s advantage if there were a backstop and it lasted into perpetuity.

Mr Varadkar said that the Belfast Agreement and European Treaties would never have been agreed if the participants had not been open to “creative solutions and creative language”.

They were trying to reach an agreement on an orderly exit with at least a two-year transitory period to allow everyone to prepare for Brexit, to retain the common travel area, keep EU funding particularly for the North and the border areas and protect the fundamental rights of citizens, particularly those in the North.

He said a review clause would have to be negotiated. “We have yet to see proposals from the UK but if we do have a backstop if it is used, if it does apply and potentially if it does last into perpetuity it may be to our advantage or necessary at various points in time to have a review.”

But they would not allow a review clause that had an expiry date or that allowed the UK to resile unilaterally from the backstop.

There were sharp exchanges in the Dáil between the Taoiseach and Sinn Féin leader Mary Lou McDonald who accused him of “a cock-up plain and simple” over his remarks and claimed “you shifted position, not as a matter of nuance but a substantial, and I believe reckless, change”.

She called on Mr Varadkar to reject “any notion of a review clause in what is to be our insurance policy in the face of Brexit”.

The Taoiseach however rounded on her and said “it is a very good thing that you’re not leading these negotiations.

“You hold the world record for failing to negotiate a coalition agreement in Northern Ireland, for now more than two years.

“You’re too extreme, you’re too uncompromising and you’re too bullying. You would turn friends into enemies within months.”

Ms McDonald said that “now we’re at crunch time” and all the Taoiseach had done was to “muddy the waters”.

Mr Varadkar said that “to come to an agreement you have to be open to creative solutions and creative language”.

He said that John Hume and Seamus Mallon, David Trimble and Gerry Adams would not have negotiated the Belfast Agreement had they not recognised that and the same applied to all the European Treaties that had been negotiated over the decades.

Later during Taoiseach’s questions Green Party leader Eamon Ryan supported a review but only “ with a view to replacing the backstop on the basis of consensus”.

The Taoiseach said “many international treaties have review mechanisms and much of the legislation we pass in the Oireachtas has them”.

He told People Before Profit TD Richard Boyd Barrett that there was no provision for a Dáil vote as it was an EU/UK matter “but I am confident that if there is an agreement, it will not be one on which we will need a vote because it will do what we want it to do and satisfy our needs”.

Tánaiste Simon Coveney later told the Seanad that he believed a no-deal Brexit was unlikely despite the current challenges. He warned that in the event of a no-deal endgame “everyone loses”.

Mr Coveney also said that if they got a deal on the withdrawal agreement they would move on to stage two which was “negotiation on the detail of the future relationship which in my view will take at least two years to deliver”.