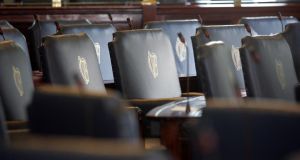 Abolishing the Seanad is only part of the promised reforms

The biggest hurdle the Government faces in its campaign to abolish Seanad Éireann will be to show how it can change another largely unreformed institution: Dáil Éireann.

In its March 2011 programme, the new Coalition promised a “democratic revolution” which would involve a substantial transfer of power from the executive (central government) to national parliament.

How effective has that “revolution” been? Well, there have been changes but the results have been mixed with many Fine Gael backbench TDs privately complaining many have not lived up to their billing.

In its favour, there have been more sitting days. That number, however, has gone nowhere close to the promised 50 per cent increase. There were 123 sitting days in 2012 and there may be over 125 in 2013. In the last comparable year for the previous government, 2010, there were exactly 100 sitting days. That’s an increase of about 23 per cent, not bad but still short of the target.

It also promised to end the practice of guillotining debates but that has been a complete failure – debate on more than 60 per cent of all Bills have been cut short. Another headline reform was the introduction of topical issues during the afternoon of sitting days. This would allow backbench TDs to ask urgent and topical issues of the relevant senior Minister.

‘Deplorable’ record
Senior Ministers made themselves available for only 97 of 360 questions (or one in four) from last September. On at least a dozen occasions it was left to a junior minister from an unrelated department to read out all four scripts, much to the annoyance of the TD asking the question. Government chief whip Paul Kehoe admitted the record was “deplorable”.

The promise to reduce the number of TDs in the Dáil by 20 became a decrease of only eight after the last census showed an unexpected increase in population, although to his credit Phil Hogan has ensured that 30 per cent of party candidates must be women from now on. The loss of the Abbeylara referendum denuded parliamentary inquiries of any prospective powers (and the new Bill will not fully repair their hand). The Petitions Committee has been moribund for most of the past two years. The doubling and tripling up of responsibilities for committees has left some overburdened. Friday sittings occur only once a month and are poorly attended. A few interesting Bills have been introduced by backbench TDs but few, if any, are likely to become law.

Last month Taoiseach Enda Kenny promised further far-reaching reforms of the Dáil, essentially to compensate for the loss of the Seanad. This would be designed to demonstrate a unicameral parliamentary system can still fulfil a “checks and balances” role and properly scrutinise legislation.

Power in Irish democracy is concentrated in the executive’s hands, and that perception has been magnified by the Economic Management Council, which is seen as a form of star chamber.

One undoubted recent success was the manner in which the health committee approached the abortion Bill, bringing in expert and interested parties before the Bill was drafted, and wading through a very difficult course, in a manner largely nonpartisan.

The Taoiseach says that model will become mainstreamed for most non-emergency legislation. In addition, to allow further scrutiny, a new stage will be introduced after report stage (the usual final stage in the Dáil). This will be called the pre-enactment stage, and will presumably assume the legislative function currently performed by the Seanad.

Fourteen Dáil committees will be established in all, each with 12 members. The vast majority of chairs have been selected from Government parties until now, but it is now promised the d’Hondt system will be used to distribute the chairs, and to bolster and encourage their sense of independence. External experts will be allowed provide specialist input before draft legislation is drawn up.

Will those changes be enough? Will there be a genuine transfer of power to parliament? Will it provide sufficient checks and balances? These questions will be revisited again and again over the next three months.