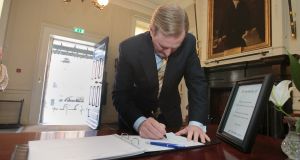 Taoiseach Enda Kenny signs a book of condolence which was opened in memory of the victims of the Carrickmines fire in Dublin. Photograph: Gareth Chaney/Collins

Taoiseach Enda Kenny has led the expressions of sympathy in the Dáil for those who died in the Carrickmines and Louth tragedies at the weekend.

Mr Kenny said the “scene of the inferno’’ at a halting site in Carrickmines in Dublin on Sunday that claimed the lives of 10 people would remain with him forever.

“The silence and sadness of the people in attendance demonstrated their solidarity with the families and the children, as Garda technical personnel went on with their work amidst the carnage on the site,’’ Mr Kenny said.

He said Garda Tony Golden was “a community garda with a passion for public service’’ who had been taken from this life while carrying out his public duty.

He extended sympathy to all the families affected by the weekend’s tragedies, adding that the Tricolour would fly at half-mast on all public buildings on the days of the funerals.

Tánaiste Joan Burton extended her deepest sympathy to the families who had lost loved ones in the tragedies.

“This was a truly horrific weekend, a desperate weekend that affected not just one family or one community . . . [all] the more heartbreaking because it took place against a weekend which was also a celebration of all that is best in Ireland, ’’ she said.

Ms Burton said 12 people and one unborn child had lost their lives and it was not possible to fathom the grief of the families involved.

“We see these images and our hearts are broken,’’ she said.

Fianna Fáil leader Micheál Martin said the Carrickmines fire was “particularly heartbreaking for the families and for the Travelling community but also for the wider community”.

He also extended his party’s sympathies to the Golden family and said that Garda Golden’s “very last act was to help someone in dire need, and as a result he made the ultimate sacrifice by losing his own life”.

Mr Martin said Garda Golden “has paid with his life for his dedication to his profession and his valour by helping a woman who was a victim of domestic violence”.

Sinn Féin leader Gerry Adams said it was a time for the Dáil to stand in solidarity with the Traveller community and that that solidarity should extend beyond rhetoric and into practical expressions.

“And it is crucially important that the heartbreak arising from the calamity in Carrickmines galvanises Government and local authorities to prioritise living accommodations for Travellers and to ensure that the tragedy of Carrickmines is never repeated.”

Mr Adams said that the morning after the Carrickmines fire a man was found dead in the doorway of a shop on Westmoreland Street in Dublin, and he offered his party’s condolences to the man’s family and friends.

Extending his sympathy to the family of Garda Golden, Mr Adams said: “He is a hero.”

He said that Adrian Mackin, who is thought to have shot the garda, “was allegedly a violent dissident”.

He said his party had “no time for those who exploit and disgrace the proud tradition and noble calling of republicanism for their own self-serving and selfish ends.

“If there are any rational people involved with these violent groups, the aftermath of the killing of Garda Golden . . . represents an opportunity for them to do the right thing - that is, to leave and to do it now.”

Independent TD Shane Ross said that a weekend of celebration was also a weekend of great tragedy for the nation.

He said the elegant words spoken in the Dáil could not express the shock and sorrow of people in the House and throughout the country.

“Sometimes the most eloquent thing you can do is be silent.”

He said of the Carrickmines tragedy that “there is a particularly unpleasantness about the fact that it happened to a group who are marginalised in society and who are traditionally defenceless”.