Socialist TD says neither Ahern or Haughey ‘for all their sins . . went and called out the dogs’

There has been furious exchanges in the Dáil after Ruth Coppinger TD was accused of calling the gardaí 'dogs'. 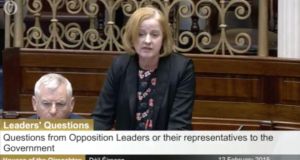 There were heated and bitter exchanges in the Dail, when the Government accused Socialist Party TD Ruth Coppinger of referring to gardai as “dogs’’.

Ms Coppinger denied she was referring to gardaí, when she used the term “called out the dogs”, and said she was using a figure of speech.

The issue arose when she raised the arrest of people in west Dublin in connection with the ongoing investigation into the anti-water charges protest in Jobstown last November.

Earlier, the Socialist Party TD said that for four days in a row there had been unprecedented Garda operations in west Tallaght, with early morning arrests rather than questioning people by appointment.

Ordinary men and women, and children in legal terms, had been arrested in front of their families and neighbours as well as three elected representatives for the Anti-Austerity Alliance.

Ms Coppinger asked Tánaiste Joan Burton if she was comfortable that teenagers had been arrested because they may have taken part in a protest against her.

There was genuine fear among people they would be arrested and who would mind their children, she added.

Ms Coppinger said for decades ministers and taoisigh had gone around the country encountering hundreds of protesters, having their cars impeded and subjected to verbal abuse.

“Neither of them, for all their sins, went and called out the dogs and called on a repressive police response for the behaviour they faced,’’ she added.

Her remark was greeted with uproar from the Government benches.

The Tánaiste said in the interests of the many gardaí who served this country and its citizens with distinction, heroism and bravery, she should withdraw the remark.

“I think it is important, notwithstanding that you are given to fairly colourful rhetoric when you speak here, that you would address that issue,’’ she added.

“The gardaí do not deserve to be spoken of in those terms.’’

She said at many of the protests she had heard language used to men and women gardaí which was not appropriate.

Ms Burton said an independent Garda was paramount for anybody who respected the Constitution.

Ms Coppinger’s party colleague Joe Higgins said: “In the English language, we use figures of speech for effect and to drive home a point.’’

He said his colleague had not referred to the gardaí as dogs.