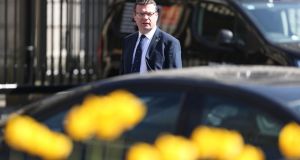 Efforts to suppress Covid-19 are working as the reproductive rate of the virus is now between 0.7 and one, according to Minister for Health Simon Harris.

He told the Dáil on Thursday that hospital admissions had also plateaued.

Mr Harris said that the reproductive rate which is known as R0 or R naught, could be calculated using four varying methodologies and all of them showed a rate of between 0.7 and one in Ireland.

Earlier Taoiseach Leo Varadkar warned that it could take several months to ease all restrictions.

As the Dáil met to debate the Covid-19 pandemic Mr Varadkar said he did not know if the restrictions imposed until May 5th could be lifted, but even if they were it would be a gradual process that could take a number of months.

Restrictions were imposed on March 27th and extended on April 10th until at least May 5th.

Labour Party leader Alan Kelly called for the Government to make a one-off €1,000 solidarity payment to all healthcare workers for their efforts in tackling the Covid-19 pandemic.

He said that “with the May Day bank holiday approaching, the day in which we honour workers, I propose introducing this payment in the first week of May as a symbolic gesture of gratitude for all the work our healthcare workers have done and will continue to do”.

Mr Varadkar warned that even if restrictions were lifted they could be re-introduced if the number of cases and deaths rose again.

He added that “only a scientific breakthrough – a vaccine or an effective anti-viral medicine – will truly allow life to go back to being as it was”.

He said they would look at how other countries who were two to three weeks ahead of Ireland eased restrictions.

The Taoiseach paid tribute to the two healthcare workers from St Luke’s hospital in Kilkenny who died as a consequence of Covid-19. He said it “reminds us how healthcare workers, and other essential workers, put themselves at risk”.

Mr Varadkar also offered sympathies and condolences to the families and friends of the more than 400 people who have died as a consequence of coronoavirus in the Republic. He said they were “people, not statistics” with families and friends, lives and stories.

Party leaders joined in tributes to those who died and Mr Varadkar and opposition leaders wished Sinn Féin leader Mary Lou McDonald well in her recovery from the virus.

He said “we’ve been presented with an unprecedented set of challenges. There’s been no rule book . . . as to how this country or any country can deal with a crisis of this nature”.

He said they wanted to “honour the sacrifices made . . . by developing a new social contract between citizens and State”.

Mr Varadkar also said Ireland was in the top five EU countries for testing with more than 90,000 – or 2 per cent of the population – tested. He added that there would be problems from time to time with testing because of shortages and because there were different reagents for different tests and machines.

Fianna Fáil leader Micheál Martin said he knew of at least one case where relatives in a nursing home were informed that the Department of Health had told the home it “should not give out information about the number of cases in the home. This information will come out anyway.”

Sinn Féin finance spokesman Pearse Doherty said the most regrettable thing was that the crisis in residential care settings could have been somewhat foreseen.

Nursing Home Ireland introduced restrictions on visitors on March 4th but the department only gave approval 10 days later and that “has proved to be a monumental and fatal error for many of our most vulnerable citizens”. Mr Doherty said they had to improve access to personal protective equipment as 29 per cent of their facilities have not yet received supplies.

Staff at Maryborough Centre in Portlaoise, where eight people have died as a consequence of Covid -19, appealed for equipment more than two weeks ago, he said.

1 Miriam Lord: Paschal’s win makes Phibsboro the financial capital of Europe
2 Reopening of pubs that do not serve food may be delayed beyond July 20th
3 Hundreds of substitute teachers may be hired full-time to keep schools open
4 Brightest comet of the century visible in Irish skies for the next week
5 Johnny Depp: Ex-wife or friend defecated in bed in ‘fitting end’ to marriage, court hears
Real news has value SUBSCRIBE