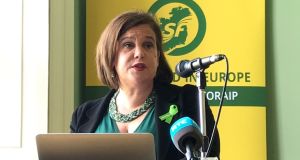 An Bord Pleanála is unlikely to approve housing proposals that breach Government guidelines, including features like scores of people sharing a kitchen, Taoiseach Leo Varadkar has said.

He was responding after Sinn Féin leader Mary Lou McDonald condemned a proposed “co-living scheme” that included box rooms size of a parking space with a fold up bed and a kitchen shared by 42 people.

“It’s €1,300 per month for what amounts to glamourised tenement living,” she said.

The Sinn Féin leader referred to a scheme proposed for Dún Laoghaire by Bartra Capital and she criticised Minister for Housing Eoghan Murphy for endorsing co-living schemes and describing them as an “exciting” development.

“Co-living has no place in our dysfunctional rental market. It is no solution,” she said.

The Taoiseach pointed out that there were about five co-living schemes currenlty being developed, constituting 1 per cent of housing developments.

“It’s not going to replace traditional housing. But it’s another option for some people, maybe young people,” the Taoiseach said.

He believed that An Bord Pleanála were unlikely to approve plans which breached Government guidelines.

He said the Government was making progress in tackling the housing crisis.

Mr Varadkar claimed Sinn Féin had not opposed the guidelines on co-living proposes. The party had no solutions when it came to housing, he said. “All they can do is launch personal attacks on others”.

Later, People Before Profit TD Richard Boyd Barrett hit out at the “latest ruse” by property speculators who were renting homes in the Honeypark estate in Dún Laoghaire.

He claimed they were using some “obscure calculation” to rule out tenants who qualified for housing assistance payment.