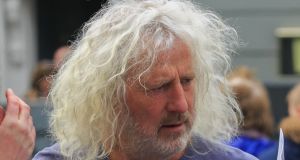 Independents4Change TD Mick Wallace made the remark about the national children’s hospital costs as he renewed his appeal for the Government to reconsider the tender. File photograph: Gareth Chaney/Collins

The national children’s hospital costs debacle has been described as a “f****** joke” during a late night Dáil debate on the PwC report into the cost crisis.

Independents4Change TD Mick Wallace made the remark as he again renewed his appeal for the Government to reconsider the tender.

During a series of statements on the spiralling costs, currently projected at €1.7 billion, Mr Wallace said he did not hold Minister for Health Simon Harris to account for this, because he did not believe Mr Harris was making the “mad decisions” to continue with the project in its current state without a retendering process.

The Wicklow TD said the failure to address the nature of the contract was a huge mistake. “I can only assume the reason you won’t do it is you don’t want the project stalled for a period”, because it would “look bad”, particularly with forthcoming elections.

But he said the handling of the debacle was a “f*****g joke” and was remonstrated with by acting chair Fine Gael TD Alan Farrell, who said Mr Wallace knew the rules about bad language.

Mr Harris said the independent review did not find the procurement process was flawed, but that it was poorly executed. A team including building experts put together by the PwC review did say a retender process would cost more.

The Minister said his department was working on the development of a plan for the implementation of the PwC report recommendations, which he would deliver in May.

Minister for Finance Paschal Donohoe said that in advance of the costs issue becoming “as public as it has”, they evaluated all the different options. If the project had gone out to retender there was no guarantee the costs would be any lower and it would have taken even longer to complete, he said.

His department was conducting a review of cost estimations of capital projects and how they could be better managed.

“Risks do exist, complexities exist” but they were looking at better measures in the future for important capital projects as they had been doing for Ireland 2040 infrastructural developments.

Earlier, Labour health spokesman Alan Kelly launched a scathing attack on the Department of Public Expenditure and Reform and said it did not make sense that the department “wasn’t all over this”.

The Tipperary TD also asked Mr Harris why there was not “better communications between your department and the public expenditure department”.

Mr Kelly said he had been a minister, and the department would “argue with you over a fiver”.

He said it was “unbelievable” that nobody knew about rising costs for the national children’s hospital when three different groups were involved in its development.

Fianna Fáil health spokesman Stephen Donnelly said the Government had gone so far as to say €1.7 billion was a reasonable price to pay for the hospital, while at the same time consultants were saying their budgets were being squeezed. More than 100,000 patients were waiting a year and a half to see a consultant, up 800 per cent in three years.

Sinn Féin health spokeswoman Louise O’Reilly said the Minister was going to have to say “where the axe will fall” in relation to the €1.7 billion hospital cost because “you can’t get money like that out of the sky”.

She added that the report essentially said the project was hamstrung from the beginning.

“It is my view we’ll be looking at €1.7 billion in the rear view mirror pretty soon,” she said.