Broadband plan worth €3bn might be delivered in five years instead of seven, Dáil told 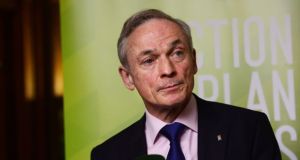 Minister for Communications Richard Bruton told the Dáil he had asked the company with the seven-year €3 billion contracts about providing the service in five years. File Photograph: Cyril Byrne

Discussions are ongoing to provide high-speed broadband to more than 500,000 Homes and business in rural areas in a shorter time than agreed in the National Broadband Plan.

Minister for Communications Richard Bruton told the Dáil he had asked the company with the seven-year €3 billion contracts about providing the service in five years.

Mr Bruton said he had asked asked officials to investigate whether those due to get high speed broadband in the last two years of the contract with of the rollout could get it earlier.

“The target is to try to from the second half of next year to try to accelerate the rollout. I hope that this can be achieved,” he said.

Speaking during a debate on the impact of the Covid-19 pandemic on communications, climate action and the environment, Mr Bruton said discussions were ongoing with National Broadband Ireland to speed up the contract.

Currently under the contract 250,000 rural residents will have high speed broadband by the end of 2021 and the remaining 290,000 homes and businesses will receive the service over the following five years up to 2026.

The Minister said department officials were in discussions with the company “to investigate the feasibility of accelerating the rollout of the National Broadband Plan, so that those now schedule in year six and seven could be brought forward”.

“I think in this crisis, people can see the value of being connected, no matter where you’re living,” he said.