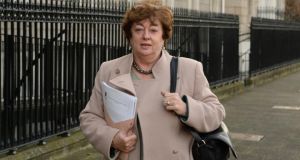 Catherine Murphy TD (Ind): “Why did you choose to accept a more expensive option that required us to borrow from the Pension Reserve Fund with massive interest costs?” Photograph: Cyril Byrne/The Irish Times

A water meter is installed somewhere in Ireland every 30 seconds, Minister for the Environment Alan Kelly has told the Dáil. Irish Water has installed more than 513,000 meters and some 920,000 households “have responded to Irish Water’s customer application campaign so far”, Mr Kelly said.

The Minister said the absolute maximum net cost for water would be just over €3 a week and €1.15 for households with a single adult, which “puts our water bills among the lowest in Europe”.

Mr Kelly was speaking as he opened the two-day debate on the controversial Water Services Bill, which gives effect to the Government’s revised proposals on water charges and the operation of Irish Water.

He said most European cities had spare water capacity of 15 to 20 per cent, but Dublin has surplus capacity of only 1 to 4 per cent. “Put simply, within a decade there will be water shortages in Dublin.”

The Minister said 84 per cent of Irish Water’s 1,300 jobs went to the unemployed, employees of small- and medium-sized enterprises, graduates, school leavers and apprentices. He said Irish Water had its problems, but it was only fair to acknowledge its achievements.

Sinn Féin’s environment spokesman Brian Stanley said that while €40 million a year was spent fixing leaks between 2010 and 2013, the cost of meters had risen from €431 million to €539 million, making the total cost of Irish Water close to €800 million.

In contrast, he said, the investment programme to fix leaking pipes over the next three years was €150 million.

Fianna Fáil’s environment spokesman Barry Cowen, said that “rather than come out with one hand up”, the Government “should have come out with two hands up. It should admit defeat, acknowledge the huge losses incurred by the State due to the path that was taken and start again”.

Socialist TD Paul Murphy said there was an understanding that water charges at any level were unacceptable, that they represented the commodification of water and had to be stopped. “The result is that next Wednesday people will flood the streets.”

Independent TD Shane Ross hit out at Siptu. “What has happened to the leadership of this great trade union that it is asking people not to go on the streets next week?”

Independent TD Catherine Murphy said the Government had failed to answer questions about the granting of the meter installation contracts. Ms Murphy, who has repeatedly raised the issue, asked why a cheaper installation offer from Siemens was dismissed.

“Why did you choose to accept a more expensive option that required us to borrow from the Pension Reserve Fund with massive interest costs?” she asked.

Ms Murphy also queried how GMC-Sierra was awarded a contract even though it did not legally come into existence until 15 days after the closing date for bids, on June 30th, 2013.

Fergus O’Dowd, the former minister of State with responsibility for Irish Water, supported the Bill as an improvement on what was initially planned but said it did not go far enough. Mr O’Dowd said there should be a referendum on the issue.