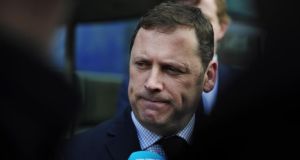 “We are obliged in this House to seek to remove whatever obstacles that are preventing the implementation of any plans,” Mr Cowen told the Dáil on Thursday.

He said only 1,829 housing units were under construction as part of the Government’s plans. “The rest are going through various stages and the majority of them were approved over two years ago,” he said.

Mr Cowen accused the Government of being obsessed about announcements in the hope that people would be bamboozled by detail.

Tánaiste Frances Fitzgerald, who took Opposition Leaders’ Questions, said the country was in a extraordinarily difficult economic situation just a few years ago. On Wednesday, she told the Dáil that unemployment figures were revealed to be down 6.8 per cent, a figure Fianna Fáil said would never be reached, she added.

The Government was providing more money and more detailed work with local authorities to deal with the housing situation, Ms Fitzgerald said.

The Tánaiste later said the allocation of €32 million to deal with repair and leasing of housing would be announced and local authorities would work to ensure that more properties were available for people seeking housing.

She said the four Dublin local authorities had confirmed the target would be met to ensure children and families would not be using hotels in the city.

There was a targeted social plan, but it would take some time, Ms Fitzgerald added.

In the past number of months, he said, the Government had managed to stop the significant increase by taking a lot of people out of homelessness as quickly as possible.

“We need to ensure that we slow down the numbers becoming homelessness and continue to increase the pace in which we can facilitate the transition out of emergency accommodation,” Mr Coveney added.

“I am still confident we can do that by July 1st.”

Mr Coveney said it was a big job to get between 700 and 800 families out of hotel accommodation and into appropriate accommodation in that period, but the Government was determined to do it.