Tánaiste rejects call by Independent TD for commission of investigation 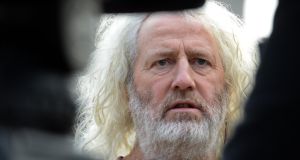 Independent TD Mick Wallace has claimed “fixers fees” of €45 million were paid out during the controversial sale by Nama of its Northern Ireland loan portfolio of 800 properties.

Mr Wallace also claimed that before US investment company Cerberus Capital Management completed the purchase of the portfolio, the largest property sale in Irish history, representatives acting on its behalf approached developers to sell them back their old loans for half price.

He and Sinn Féin leader Gerry Adams called on the Government to launch a commission of investigation into the sale.

He told the Dáil during Leaders’ Questions: “Before they even bought it, a group of individuals went around to the big developers and asked them would they buy their loans back for 50 pence in the pound.

“And do you know what? They jumped at it,” he said. “But they had to pay a fixer’s fee. The £7 million in the Isle of Man was only for openers. €45 million has been paid to fixers.”

The Wexford TD first raised the sale of the Northern Ireland portfolio in the Dáil in July.

At the time he claimed an Isle of Man bank account containing £7 million had been set aside for a number of individuals, including a Northern Ireland politician or party.

“Why haven’t they been disqualified from Project Arrow? How in God’s name can you tolerate that?” he asked Tánaiste Joan Burton.

The UK’s National Crime Agency, the US Justice Department, the PSNI, the Stormont finance committee and the Oireachtas Public Accounts Committee are all examining the Project Eagle sale. Mr Wallace said the latest sale portfolio had a par value of €7.2 billion, which “Nama is threatening to sell for in the region of €1 billion”. He said 50 per cent of it was residential in the Republic, and it looked like Cerberus was going to buy it.

Mr Adams, however, told the Tánaiste that “Nama is a national body, this is taxpayers’ money. There is enough evidence here to justify a number of investigations”.