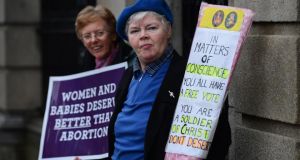 The scene outside the Dáil yesterday while the debate on the abortion Bill was being held. Photograph: Cyril Byrne

More than two-thirds of Fianna Fáil’s 19 TDs voted against the second stage of the abortion legislation in the Dáil last night, in the largest turnout for a vote since the Government was formed.

All four lost the party whip at the conclusion of the vote and were automatically expelled from the parliamentary party. They will lose their places on committees as members of the party.

As expected, Minister of State for European Affairs Lucinda Creighton voted with the Government for the second stage, but will make a final decision based on how substantive she feels the committee stage amendments are. She sharply criticised the Bill during the second-stage debate and called for a number of changes including the withdrawal of the suicide clause as well as term limits for a termination.

While Fianna Fáil leader Micheál Martin was forced to have a free vote because a majority of TDs were against the Bill, the level of opposition was a surprise, with just six TDs including Mr Martin and the party’s health spokesman Billy Kelleher voting for the legislation as did Barry Cowen (Laois-Offaly) Niall Collins (Limerick), Timmy Dooley (Clare) and Michael Moynihan (Cork North-West).

Just before the vote was called, Fine Gael’s Peter Mathews and Lucinda Creighton were deep in conversationwhile Sinn Féin’s Peadar Tóibín was in discussion with his party colleague Jonathon O’Brien.

When the vote was called, Ceann Comhairle Seán Barrett asked the TDs pushing the division to a vote, to stand.

Ten TDs are required for a vote to proceed and 15 stood. They included three of the four Fine Gael TDs opposed to the legislation stood – Peter Mathews, Brian Walsh and Terence Flanagan as well as Mr Tóibín and a majority of the Fianna Fáil TDs.

Up to 100 amendments have been submitted for debate at committee level. The Bill then returns to the Dáil for the report and final stages.