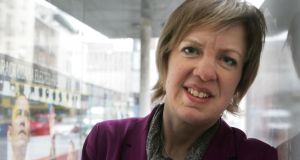 Ivana Bacik said she welcomed the “positive news’’ that Ireland had been invited to participate in the British Armistice day event. Photograph: Cyril Byrne

Fianna Fáil Senator Labhrás Ó Murchú said it would not be helpful to have a politically divisive debate on the centenary celebration of the 1916 Rising.

He said that, sadly, relatives of the “1916 patriots’’ had recently expressed disappointment, at a meeting in a Dublin hotel, about the lack of progress and information on the commemoration.

“It would be helpful if we did not have to wait for much longer to see precisely what the programme will be,’’ he added.

Mr Ó Murchú said it was not just a case of the militaristic aspect of the Rising. “It is clear from the Proclamation that the 1916 leaders were far-seeing people,’’ he added.

“Even the budgetary provisions that we are discussing can, in many ways, reflect the Proclamation, which referred to cherishing all the children of the nation equally.’’

Ned O’Sullivan (FF) said the seismic date in Irish history was 1916, whether we liked it or not, and it had informed all modern democratic politics in Ireland since.

“I would like less emphasis on the militaristic side and more on the radical Proclamation which they brought forward and which has been an example to us all,’’ Mr O’Sullivan added.

Jim Walsh (FF) said it was regrettable that descendants of the 1916 leaders were speaking about organising their own commemoration simply because they had lost confidence in the process. “This would be a real pity,’’ he added.

He said there was an urgency about discussing the details of the commemoration.

Ivana Bacik (Lab) said she welcomed the “positive news’’ that Ireland had been invited to participate in the British Armistice day event and that the Irish ambassador would lay a wreath at the Cenotaph in London next month.

Seán D Barrett (Ind) said he welcomed the announcement that Minister for Foreign Affairs Charles Flanagan had accepted an invitation to attend the ceremony. “It strengthens the improvement in relations, as manifested in events such as the Orange Order and Queen Elizabeth coming to Ireland and President Higgins visiting the UK,’’ he added.